We woke up early and transferred to our original hotel. We both felt much better after some sleep and as the guesthouse owner himself came to meet us at our replacement lodgings and walked us back to the guesthouse, apologising en route. Dropping our bags in the room, we rented a scooter and headed out for the day. First stop – the travel agents to buy bus tickets to Bangkok. Having learnt our lesson from Kratie, we went to four different places before making a purchase! Turns out that only 2 places sell tickets to Bangkok so we chose the cheapest! Got back onto the scooter and, I’m blaming the tiredness, I drove atrociously! So much so that Jayne told me off!!! Deciding it was going to be one of those days, I drove us straight to Gloria Jeans for a cup of coffee and a danish – or, as it turns out, a fruit smoothie, a coffee frappuchino, an almond croissant and an piece of Oreo cheesecake.

Feeling more human (and less likely to kill each other), we jumped back on the bike and made our way to the bamboo train when it started raining. It rained so hard that we had to take shelter in the petrol station. The attendants brought us chairs to sit on as we watched the rain pound down, frogs frolick in the puddles and drivers swerve to dodge the water filled potholes. When the rain slowed down enough, we waved goodbye to our new friends and kept driving down the road to one of the world’s all-time unique rail journeys! 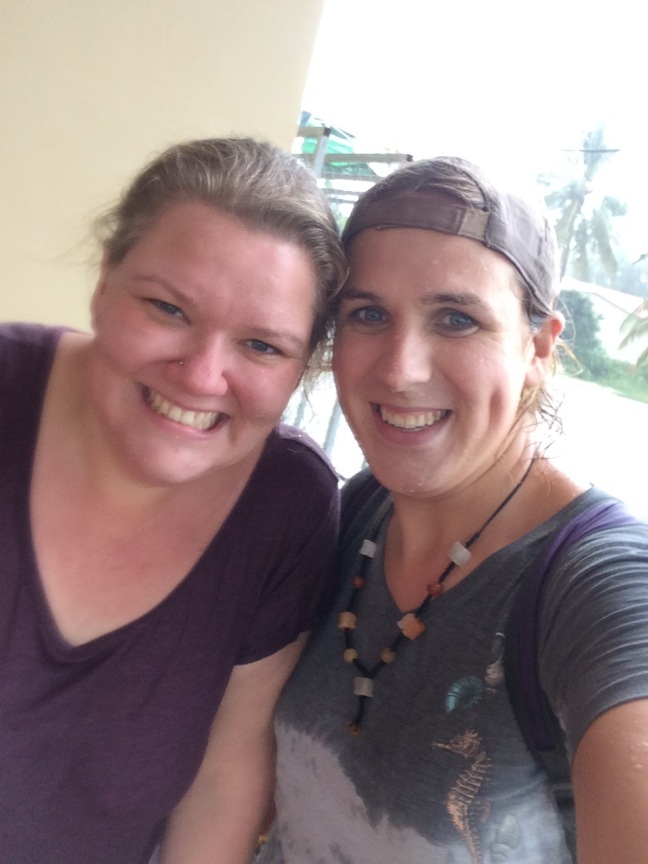 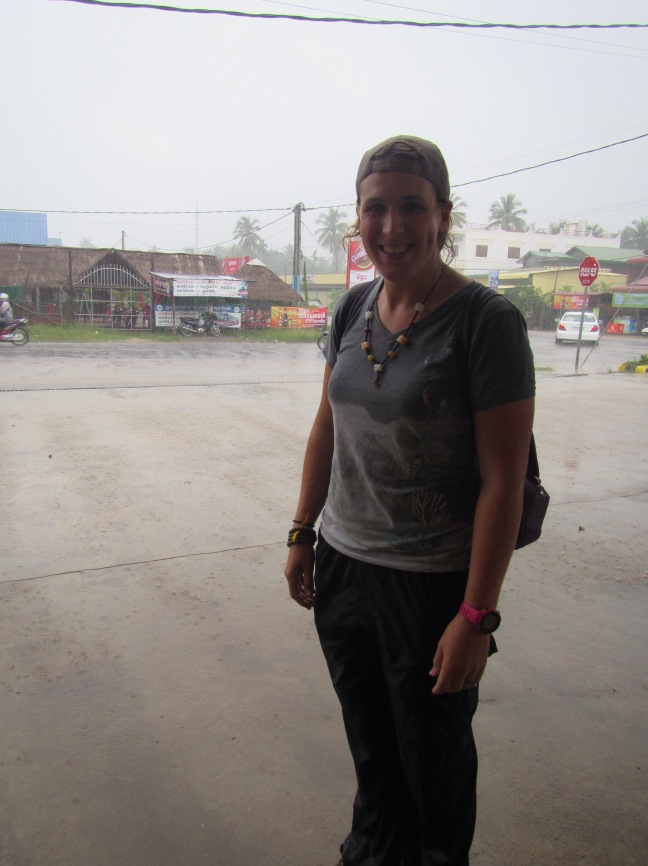 The 7km bumpy train journey goes from Battambang’s old French bridge (Wat Kor Bridge) to O Sra Lav along warped, misaligned rails and vertiginous bridges left by the French. The journey takes 20 minutes each way, with a 20-minute stop at O Sra Lav in between (for the obligatory gaggle of souvenir shops!).

Each bamboo train – known in Khmer as a norry (nori) – consists of a 3m-long wooden frame, covered lengthwise with slats made of ultralight bamboo, that rest on two barbell-like bogies, the one at the rear is connected by fan belts to a 6HP gasoline engine. Pile on 10 or 15 people, or up to three tonnes of rice, crank it up and you can cruise along at about 15km/h.

Sitting on straw mats that have been laid over the bamboo platform, we held onto whatever we could and the contraption quickly began to pick up speed!! Peeking down through the cracks at the rail tracks below was simply a blur and the long grass kept whipping our arms as the scenery shot past. We tried to talk to each other but we had to yell to be heard and, even then, the wind carried half our conversation away.

The genius of the bamboo railway system is that it offers a brilliant solution to the most ineluctable problem faced on any single-track line: what to do when two trains going in opposite directions meet. In the case of bamboo trains, the answer is simple: one car is quickly disassembled and set on the ground beside the tracks so that the other can pass. The rule is that the car with the fewest passengers has to cede priority. We got to see this in action as the oncoming train was dismantled, removed and reassembled in front of our eyes in less than a couple of minutes. 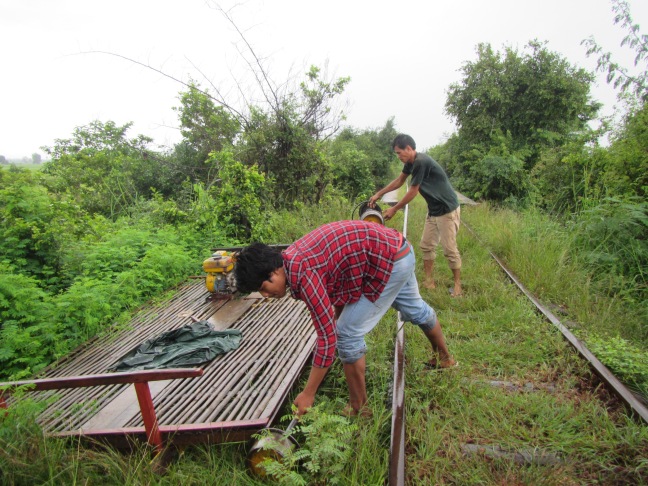 With the wind blowing in our hair, it was impossible not to smile (mainly because the speed was forcing my mouth apart) as we chugged past fields, across rickety bridges, and through stretches of bush. Locals walked on the tracks and only hopped off when the train was almost upon them. We also picked up a little girl and her mum halfway down the track.

Arriving at the souvenir station, we did the rounds of each stall to pass the time but found the begging to buy something a little bit intense. Fortunately, by the time we got back to our train it was ready to go so we headed back to the start. Got about a minute down the track when it started raining again and we were completely soaked within 10 seconds.

We were asked to tip the driver when we had finished, which always annoys me. If you ask for a tip then it is no longer a tip! One of the only times we have done it because the poor boy looked as much of a drowned rat as we did!! Jumping on our bike again before we got more demands to part with money, we had to take shelter in another petrol station as the rain made it difficult to see the road.

Used the time to work out our route to the winery (yes, a winery!) while we waited for the rain to subside. Ended up driving down a little road where we got stuck in the mud. It was slightly tough dragging the scooter out of the mud without falling over ourselves – I ended up taking off my shoes and Jayne got covered head to toe in mud after I revved the engine at the wrong time… Emerging from the mud bath onto the main road, we spent some time declogging the tyre of mud to make it safe for us to drive again as locals watched us (and were laughing, I’m sure!).

14 kilometres out of town is Cambodia’s first and only winery, the Chan Thai Choeung (or Banan) Winery, which is open for visits and tastings. Known for its production of chilli peppers (harvested from October to January), Cambodia’s only winery grows shiraz and cabernet sauvignon grapes to make reds, and tropics-resistant Black Queen and Black Opal grapes to make rosés. Both taste completely unlike anything you’ve ever encountered in a bottle with the word ‘wine’ on the label. Putting it politely, the wine is not exactly to Western tastes – it tasted like vinegar!!! We also tasted their ‘cognac’ which isn’t as bad as the wine, and their juices — grape and ginger — are pretty good. 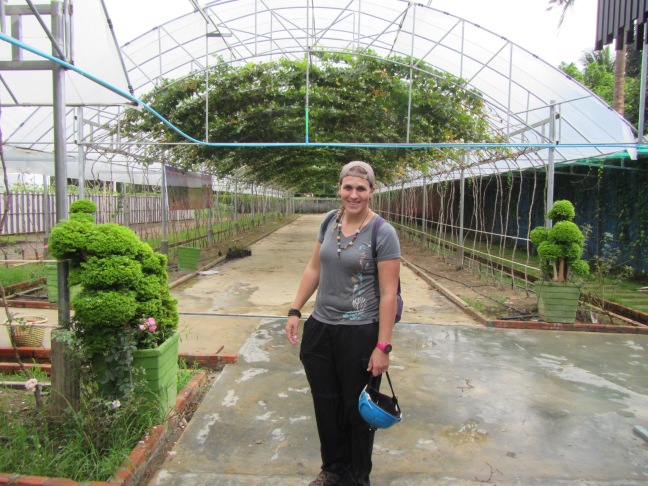 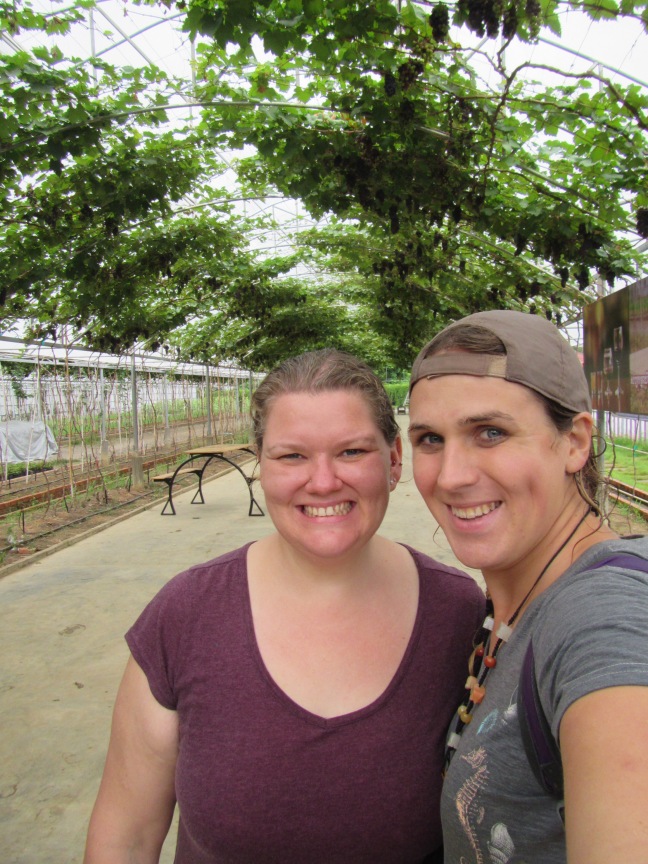 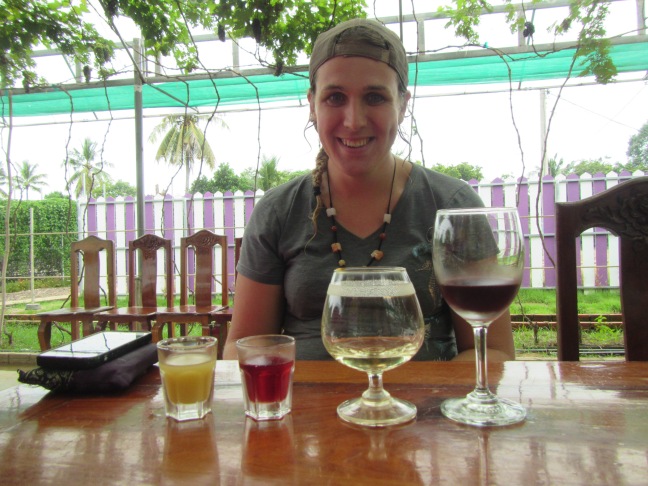 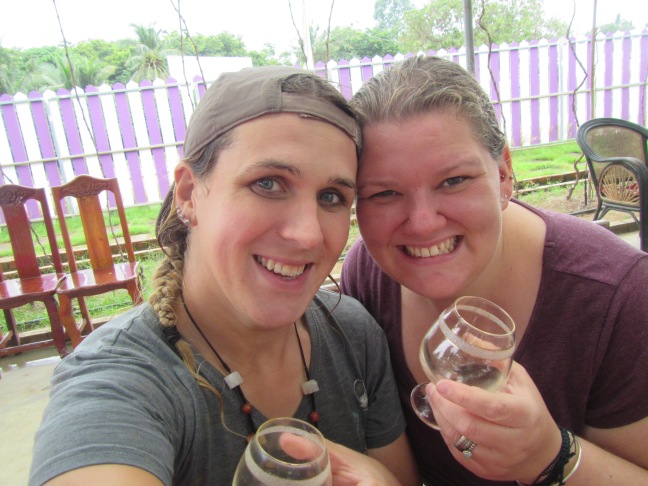 Chatting to a French couple, who we had convinced not to try the wine, we organised to meet up with them for dinner before heading back into town. Dropped off our bike and headed up to our room to remove our slightly damp clothes! Chilled out for a while before going for a walk around the night market. A slightly odd experience as the market was a mixture between food stalls and shops selling random assortments of products, all with music blaring out and drowning out its neighbour. It was intense. The fairground section was also fun with its rides hanging halfway off the pavement or being run by fans!

Met Francois and Veronica (I hope I’ve spelt their names right!) at the White Rose for dinner. It was a really nice evening, chatting about our respective travels. They had started with the Trans-Siberian railway and spent time in Mongolia – it sounds incredible and is now on my list (as is a million different other places!).

We all went back to the night market for ice cream before heading back to our guesthouses.