The morning passed us by without us really noticing. We read books, watched a film and had some muesli for breakfast. We had a visitor in the gap between bathroom window and mosquito vent, a Tokay Gecko. A bit smaller than one we saw while zip lining in Angkor jungle, this little guy was doing a poor job of staying inconspicuous. His pale blue body and orange spots were obvious even in the darkness of our weirdly shaped bathroom. We saw one later that day (two in one day – what are the chances) and managed to get a photo.

We did venture out, eventually, for the premise of lunch and stretching our legs. It was also a chance to stroll around downtown and scope out a shop for a small project we thought about. The shop however was closed, so we settled for an ice cream. A rather awkward moment in the 7 Eleven where a tourist had clearly broken something but was refusing to pay for it, blaming a staff member for pushing something through from the other side at the same time. It meant either something on the top shelf (can’t imagine anything delicate being broken) or a drink in the fridges (they’re connected to a giant cool room behind to stack items easily). Either way, exit stage left and enjoy the ice cream before it melted in a heartbeat. 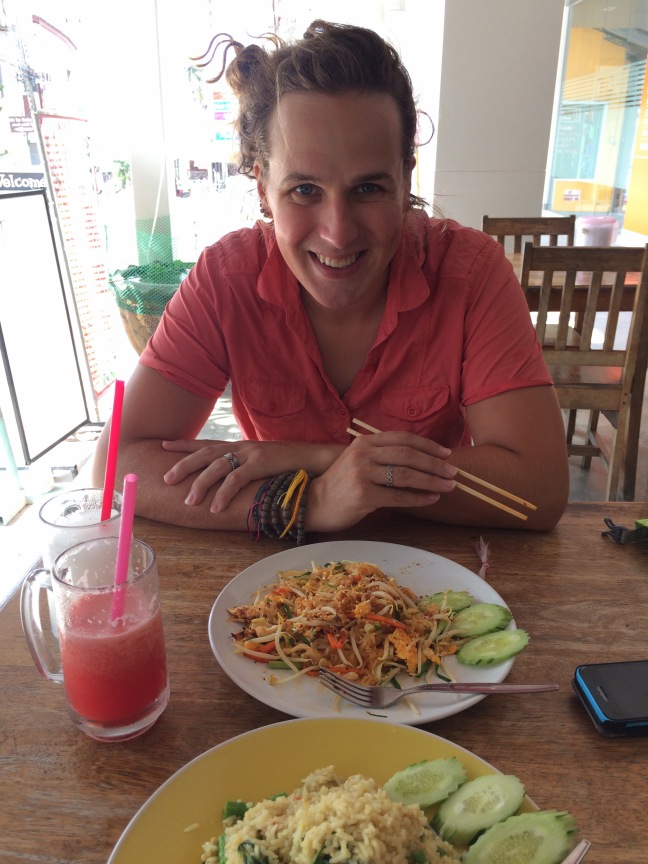 Back at the hut, Katherine continued her sniffing. Mixtures of hot and cold, stuffy and confined, plus being in a garden resort with so many plants, she started to sound like a baby elephant snuffling for a peanut. So, she finally relented for a nap and blessedly the runny nose stopped. I caught up on two unfinished blogs, meaning I just needed to crawl off the end of the bed, go outside and upload photos under the router. Or stay and play Candy Crush. Hmmmm…. easy choice!

When Sleeping Beauty stirred we went about planing our little project – a tattoo. We considered getting the Sak Yanta scripts that are very popular in Thailand and Cambodia. The 5 lines of script, tattooed on the left shoulder blade were made infamous by Angelina Jolie. However, after our research we decided not to get them done. The should only be done in that area of the body and all 5 lines should be done, not a combination of them. Ideally, they should be done or blessed by a monk at the end of the process. So, in this research we came across unalomes. Typically a design used to cap the end of a line of scripture, it has its own meaning and symbology and we both liked it. So, we trawled trough Pinterest, found two designs we liked and had the tattoo artist amalgamate the two in Photoshop to give us a unique interpretation of the blessing.

I knew straight away where I wanted to get the tattoo done and was in the chair before Katherine. The guy must have been an apprentice or newly qualified. The nervousness was pouring out of him and he was shaking like a leaf for a bit. Painful at times, the tatt took almost 40minutes to complete. Kat changed her mind for the fourth time about where she wanted it placed. Not happy with the alignment the first three times, she saw how mine looked and decided for the same place. Much quicker than mine, with less shaking and nerves, she was finished in about 10mins. Matching tattoos and happy smiles we went looking for food.

The two restaurants we normally venture to were closed/closing, so we tried a new joint. Writing all over the wall said to try the curry, but we didn’t trust the quality of the food at such a late hour and opted for noodles. They were awful, soggy and tasted of powder mix. So we got chocolate to compensate for the disappointing dinner and watched the last two episodes of Dexter Season 3 before bed.