Tracey took the extra pillow to relieve some of her back pain, I took the mattress to stop the bed frame from digging in to my hips and Katherine took the fitted bed sheet and made a cocoon like a caterpillar. But do you think any of us slept well??? Ha! It was a cold, painful night and breakfast was a subdued affair. It warranted a proper coffee for the driver in the shop as we checked out and off we went to Leliyn (Edith Falls). 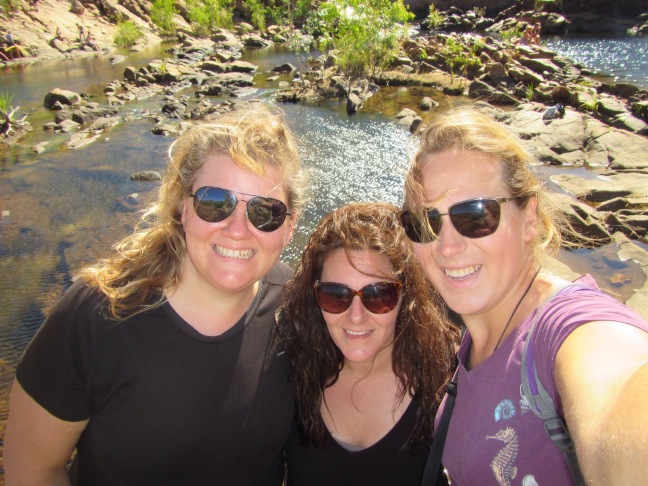 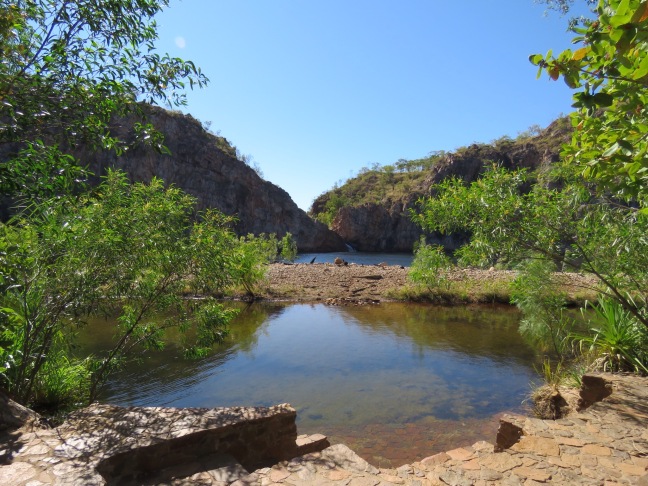 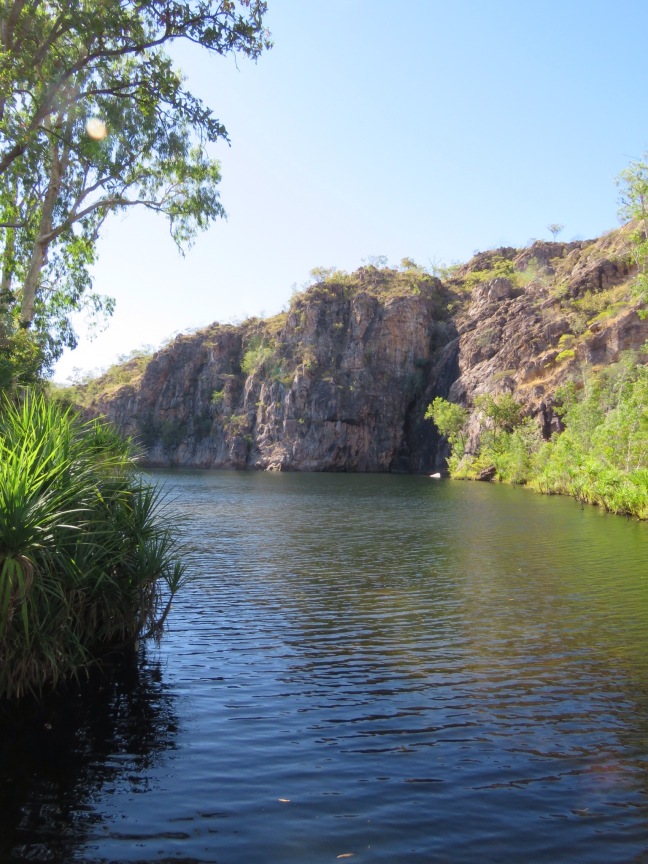 The Leliyn Trail is a bit of a loop and we took the longer section to begin, bringing us past some stunning views of the plateau and through beautiful grevillea and spinifex bush land. The Upper Pool is supposedly quieter than the pool next to the campground/car park, but it seemed far from that as we scrambled over some rocks to find a shady spot to change and leave our bags as we slunked in to the cool, fresh water. Smelling slightly of the algae growing on the rocks and giving the shallows a slightly slippy surface we lapped up the sun, chatted by the cascade and people watched. 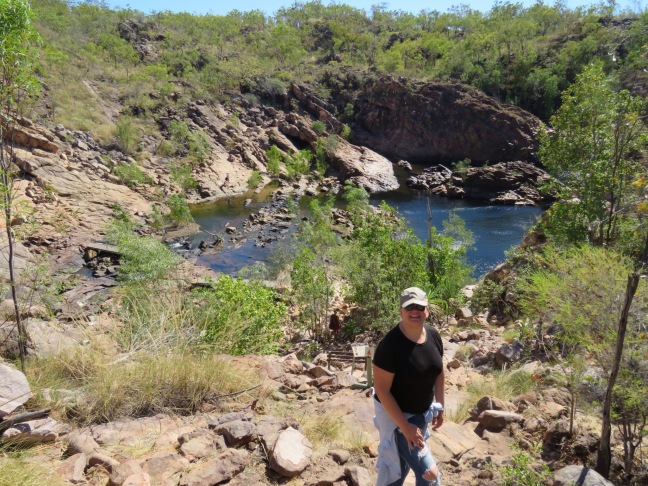 We did some proper sun-bathing on the sandstone slopes, munched on a packet of burger rings and dried off before changing. It was unusual for us that we weren’t leaving due to the heat or our skin burning. It was watching the idiots climb higher and higher up the rocks, diving in to the very shallow pool, with rocks that are hard to see with the layer of algae coating them in a dark colour in an already shaded area. We just didn’t want to be around to witness anything happen. Plus, watching the pasty white ginger kid turn a shade of beetroot was painful to watch.

Walking back to the car park via the other shorter route, we had different views and got to see the pools above where we were. Those ones are inaccessible but a trail for another few kilometres brings you to the Sweetheart Pool. We didn’t feel like we missed out in the slightest. Using the facilities and Tracey grabbing an iced coffee we headed back to the car. There was a scene very similar to Violet in Willy Wonka and the Chocolate Factory, with a previously mentioned individual being escorted back to their camper van. Maybe he was off to be squeezed?!

You can imagine that our next destination was full of photo opportunities. Or rather, they were obligatory and we were stopping every few metres down the road to let Katherine take photos next to signs of… ‘Katherine’. 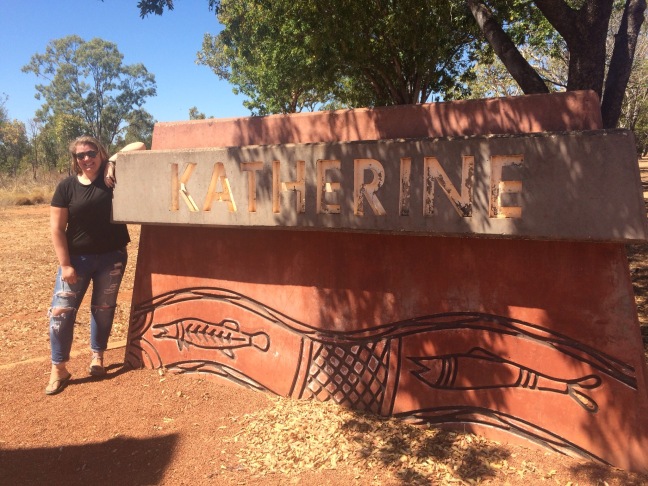 The area was named by explorer John McDouall Stuart (we are travelling mostly on the Stuart Highway) after the second daughter of one of his expedition sponsors. The area was renamed ‘Nitmiluk’ – meaning ‘cicada place’ (‘nitmi’ is the sound a cicada makes, ‘luk’ means land/place/country) – in 1989 when traditional owners, the Jawoyn Aboriginal people, gained title to the land after years of arguing with the government to prove they owned the land. Our Katherine has been beside herself that the Aussies typically spell her name correctly unlike back in the UK and takes it as another sign that we should move to Oz… mainly for the koalas.

With a few lunch supplies from Woolies we sat under a tree outside the Nitmiluk Visitor Centre and passed the time before heading down to the cruise jetty. A series of 13 deep sandstone gorges have been carved out by the Katherine River on its journey from Arnhem Land to the Timor Sea. Only 3 gorges are accessible by boat and even then, they might need another boat for the 2nd gorge if the dry season is longer than usual and makes one section too shallow. The other gorges are viewed by helicopter and had we more time we might have enjoyed canoeing the waterways.

The spectacular Katherine Gorge forms the backbone of the 2,920 sq km Nitmiluk National Park and is the most photographed section of the area. The guide books accurately describe it as a hauntingly beautiful place, with the rippling orange and red hues of the rocks towering above us on either side. The tour guide / boat driver was giving a very informative and interesting dialogue along the cruise and broke up the commentary with photo opportunities and manoeuvring the boat so that both sides could get unobstructed photo opportunities. 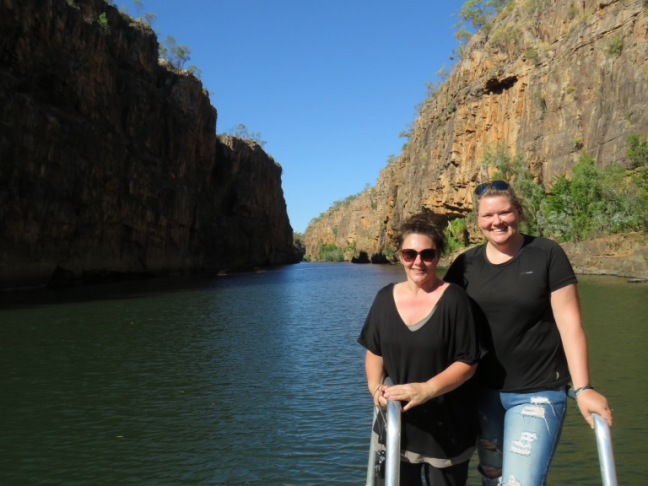 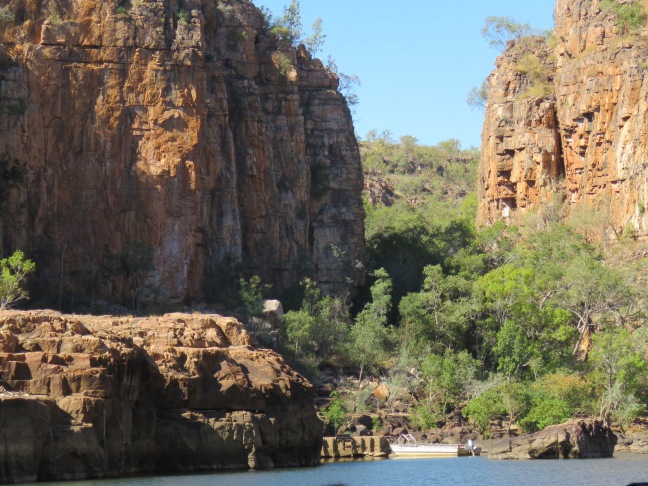 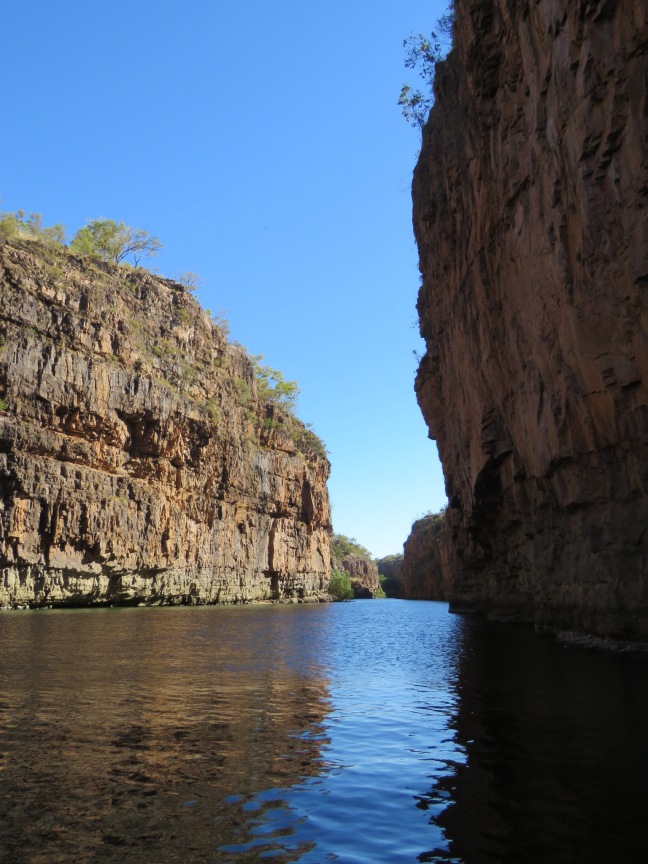 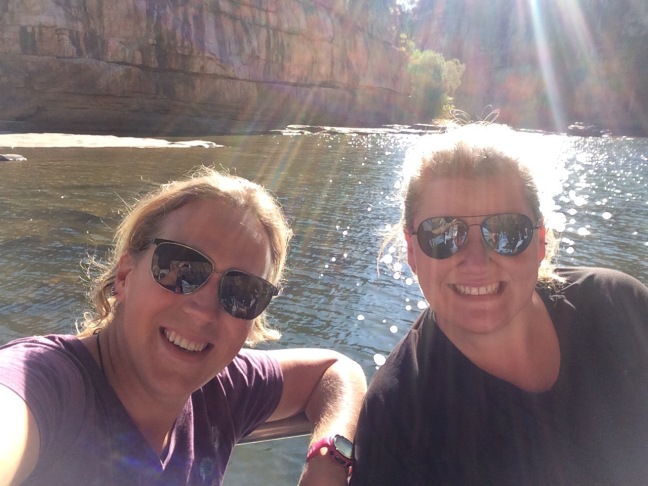 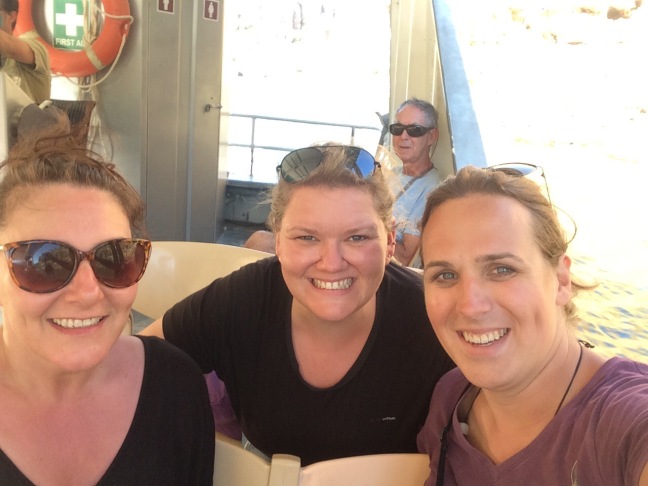 The little cuts at the edges and corners of the gorges, until mentioned by the guide, were irrelevant, but when told that they are part of lateral faults from a prehistoric earthquake then we were able to line up the opposite fault in perfect 90* angles to each other. The crocodile nesting beaches were a shiny white and a few crocs even posed for some nice photos. The best photo of the day though has to have been the ones of Katherine, driving the boat down Katherine Gorge.

Checked in at Knotts Crossing Resort, I was left behind with signs of heat exhaustion. I don’t know how I managed to get it while the others didn’t, but my head was splitting and I just wanted to sleep. Old Ninja and Fat Ninja went back in to town to get dinner and I had some Olympics on in the background. They returned with random stories: there are very few places that you can buy goon in the Northern Territory due to the alcohol problems with the indigenous and if you do find somewhere to purchase the silver pillow of goodness, then it is at certain times, once a day, with photographic id; police officers everywhere checking id’s; the petrol is a low aromatic type to reduce another problem recurring in the Top End and Outback.