An early start to the day to live the life of royalty – picked up in a private air conditioned taxi and driven around for the day! Heading down the road I had driven down on the motorbike was less painful and significantly quicker, especially as we both had a little nap as the green fields flew past. Woke up briefly to see the rain pounding down so hard that, even with the wind screen wipers going at full speed, I had trouble seeing the road properly… Clearly wasn’t an issue for our driver who continued driving and just beeped the horn occasionally.
After about 2 and a half hours, we arrived at a random ticket office in the middle of nowhere. Prasat Preah Vihear is perched high atop an escarpment in the Dengkrek Mountains and is our 57th UNESCO World Heritage Site on our travels. Relieved of $10 each for the entrance fee, we paid another $5 each for the motorbike taxi to the top of the mountain.
With the rain still falling, we climbed aboard our bikes and started making our way up the mountain. The first 5km of the access road was smooth and gradual enough, although it was extremely windy. Not sure if it was my imagination but it felt like the back wheel was slipping on the wet road around the corners. Didn’t fill me with confidence as my driver seemed convinced he should have been born a motor cross racer and insisted on leaning so far into every corner! The final 1.5 km was extremely steep – in fact, evil Kanivjl even asked me to sit closer to him as he charged up the hill as fast as he could in first gear… Think I would have preferred to have walked!!! Especially as the final section was over rocks and a mine field of potholes – think I might have dislodged some vital organs. Jayne, having arrived before me, clearly enjoyed the sight of my bits jiggering around and the look of pure terror on my face!
We walked up the hill to the crumbling Gopura V (entrance pavilion). As is was raining, the boulders were incredibly slippery – even Jayne in her hiking trainers was slipping, so me in my flip flops was like a baby deer attempting to walk for the first time – so much so, that I removed my shoes and spent the rest of the visit around the temple barefooted.

Built by a succession of seven Khmer monarchs, beginning with Yasovarman I (r 889-910) and ending with Suryavarman II (r 1112-1152), the builder of Angkor Wat. Like other temple-mountains from this period, it was designed to represent Mt Meru and was dedicated to the Hindu deity Shiva.

Looking around the Gopura, we saw the sandstone monumental stairway that leads down to the Thai border. There’s a long history of conflict between the two nations about who the temple belongs too. After years of fighting and planting of land mines from both sides, the temple belongs to Cambodia and the monumental stairway belongs to Thailand (although it is an emphatic statement that Cambodia disagrees with!).

The view from Gopura V was stunning, although it did feel slightly like it was dropping off into the abyss.

Walking south up the slope, the next pavilion we reached was Gopura IV. On the pediment about the southern door is an early rendition of the Churning of the Ocean Milk.

The galleries around Gopura I, with their inward-looking windows, are in a remarkably good state of repair, but the Central Sanctuary is just a pile of rubble. I went into the temple since I was barefooted already whilst Jayne sheltered from the rain in one of the doorways. 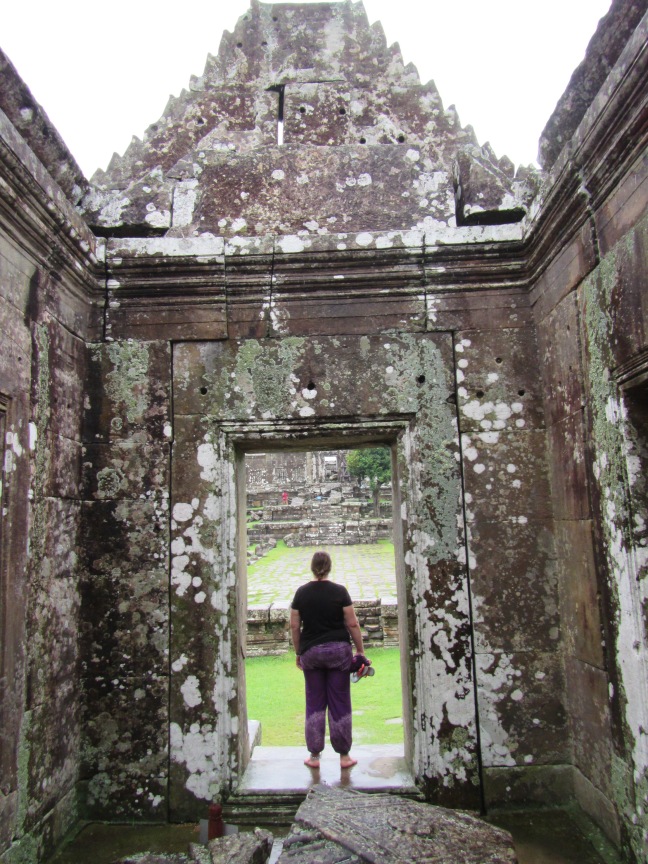 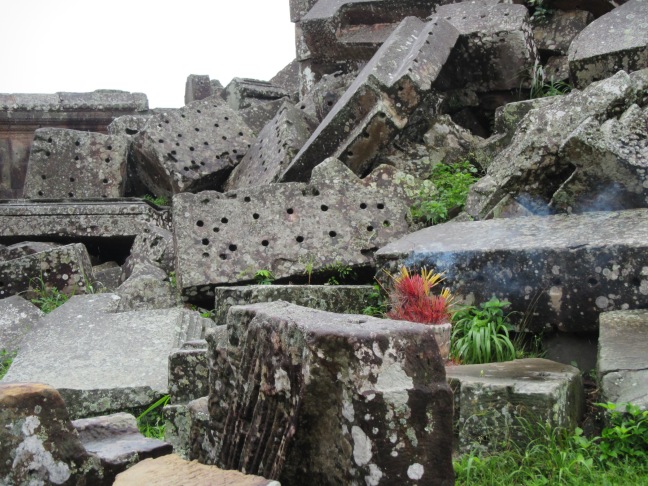 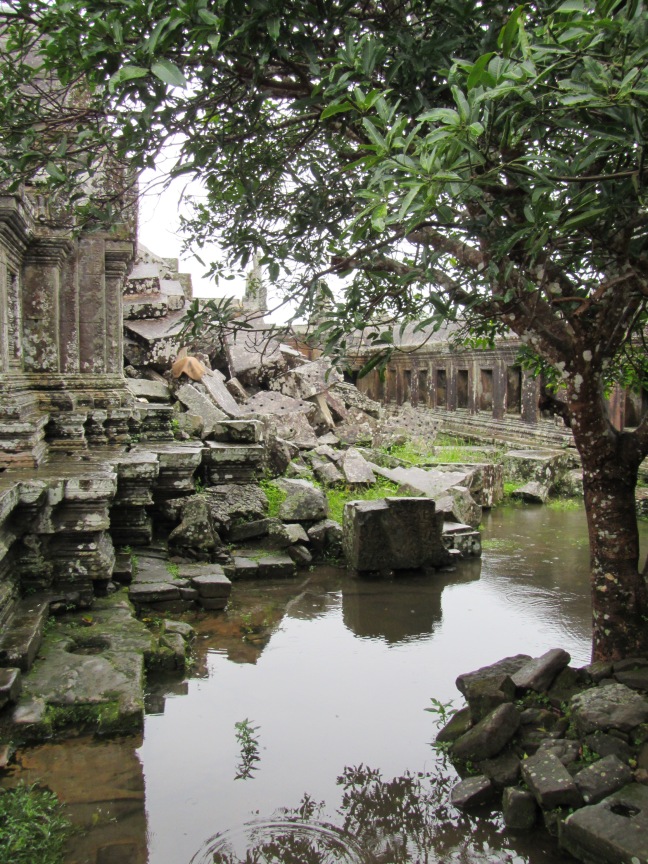 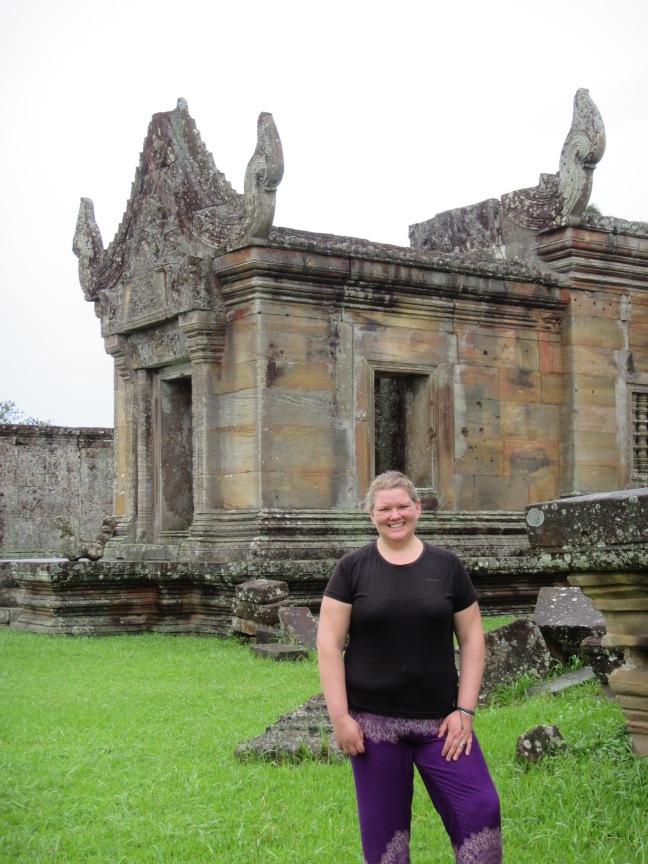 Nearby, the cliff had stupendous views of Cambodia’s northern plains although the people taking jumping photos on the cliff top made us both feel a bit uneasy, especially since the stones were still so slippery.

Wandering back through the 800m-long temple, we slipped back over the stones towards the car park to get our motorbike taxis back down the mountain. Slightly strange moment as mine admitted that he had been sick for the last 20 minutes (great!) and then proceeded to just release the breaks and let gravity do its job! Fortunately, we both arrived at the bottom in one piece but it was certainly one of the most horrific motorbike journeys we’ve had in a while!

Back in the car, we drove for about an hour and a half to our next temple complex, munching on Oreo biscuits as we drove along, chatting to the driver. Abandoned for centuries to the forests of the north, Koh Ker was the capital of the Angkorian empire from AD928 to AD944. Had to borrow $20 off the driver since we had been told that our Angkor Wat temple passes would get us into both temple complexes, which is not true! Fortunately, he didn’t mind – I have a feeling we aren’t the first tourists that have come out with money for lunch and not much else…

We started at Prasat Krahom (red temple) which is the second largest structure at Koh Ker, named for the red bricks from which it was constructed. Stone archways and galleries lean hither and thither and impressive stone carvings grace lintels and doorposts. 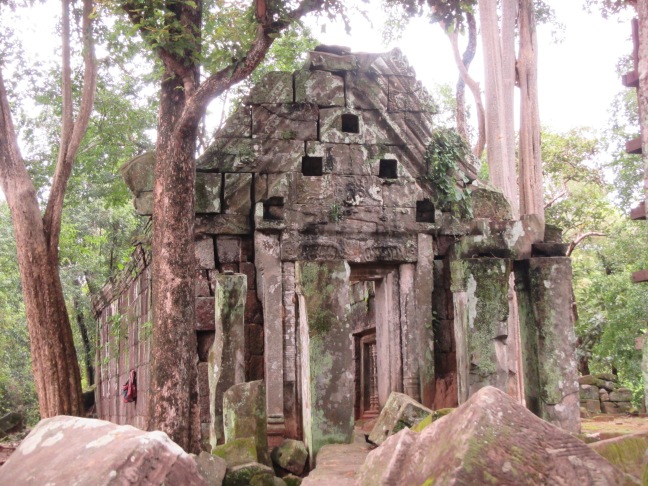 Followed round by a young man who had clearly got a new phone and selfie stick for his birthday, he was trying to take photos of the two of us from a distance (and not very subtly). Laughing, we called him over and posed properly for him so he could have a non blurry photo and then made him take a selfie on his phone of all three of us. He was delighted and had the biggest smile on his face!

Wandering through the ruins, we ended up at the principle monument at Koh Ker, which is Prasat Thom – a 55m-wide, 40m-high sandstone faced pyramid with seven tiers. This striking structure looks like it could almost be a Mayan site somewhere on the Yucatán Peninsula.

Climbing to the top of this massive pyramid via a wooden stairway with super high steps was worth it as we got views as far as the eye could see and the carvings at the top were spectacular. A couple of requests for photos with tourists and locals and we were making our way back down towards the car. 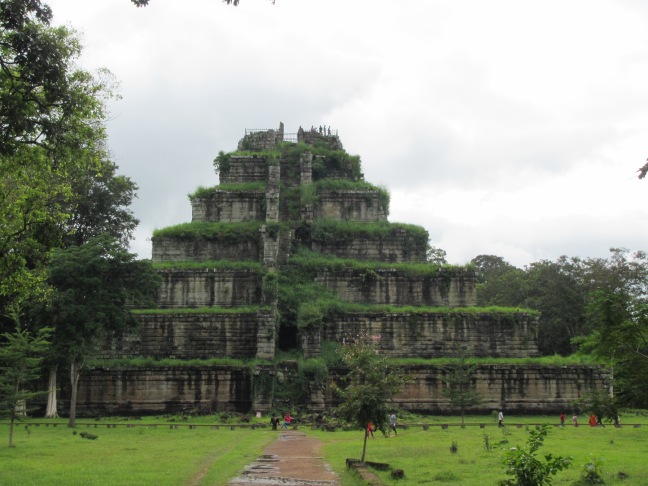 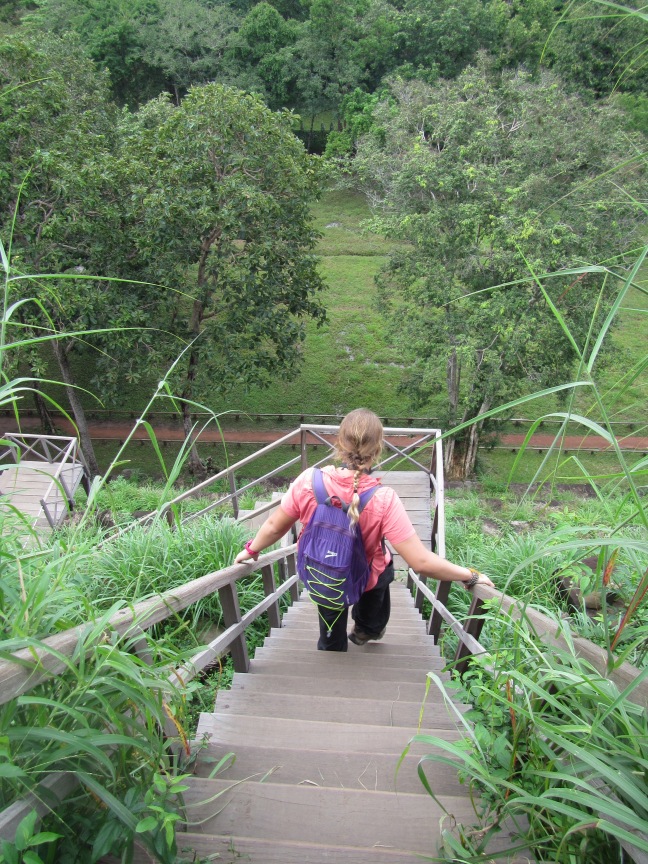 The final temple of the day was Prasat Bram. It consists of a collection of brick towers with two of them completely smothered by voracious strangler figs; the probing roots cut through the brickwork like liquid mercury. Possibly one of the nicest temples we have been to mainly because it was completely deserted. 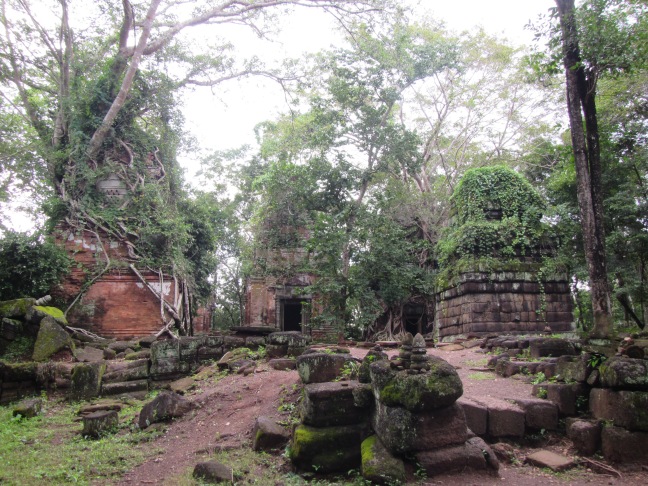 Back in the car, we made our way back to Siem Reap, stopping via an ATM so we could pay back the taxi driver. Got dropped off into the centre of town to buy our bus tickets for Phnom Penh for Monday and to have an early dinner. We choose the restaurant we went to on our first day here but the food wasn’t as good as it was back then (or maybe we have had better food in Cambodia since then?!?). Walking back to the hotel, we watched some TV before going to bed.