We had a nice leisurely start to the day, with our porridge oats in a cup that we had found back in Tromsø pairing nicely with fresh blueberries and hot black currant cordial. We then went down to the lake to become Arctic explorers ourselves, traversing the expanse over to one of the islands. The stark loneliness as we walked across the ice and snow conjured images of Polar expeditions and it was freaking awesome. I felt so alive and the cold air hurt my lungs as I breathed in. The views were worth it and it felt like a mini adventure all in itself. 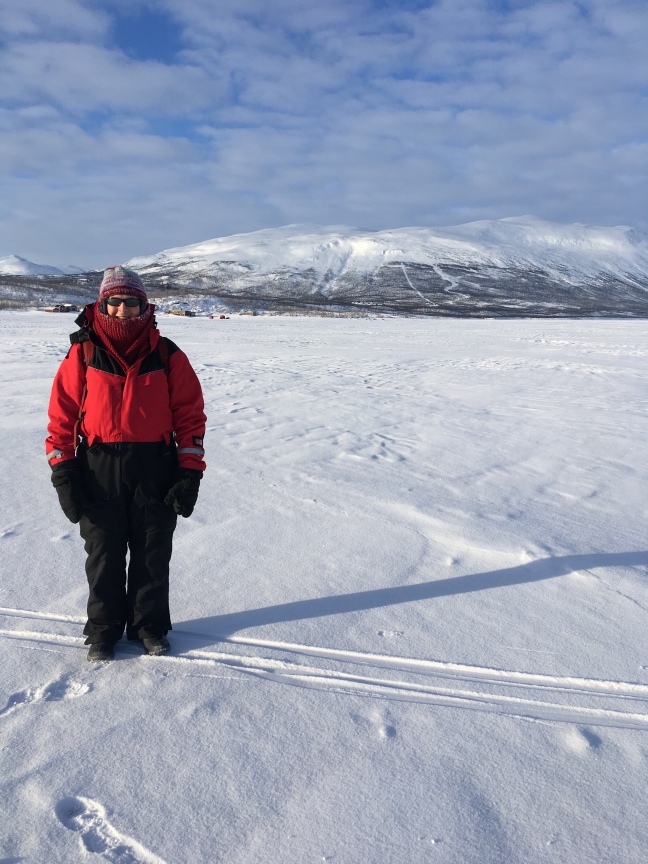 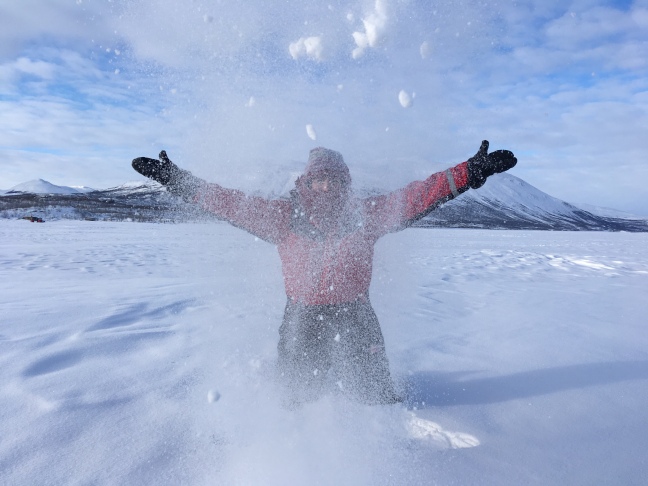 We left plenty of time to have a hot chocolate and some gingerbread biscuits before going to the station and getting the train. Those trains don’t hang about (no transport seems to hang about), with everyone frantic to get on board. The train pulled away from the station on time, while I was still waiting for a chance to put my bags on a rack. The journey was short and we watched the scenery speed past as I caught up on some blog writing and Katherine plied me with brown cheese and ham sandwiches. 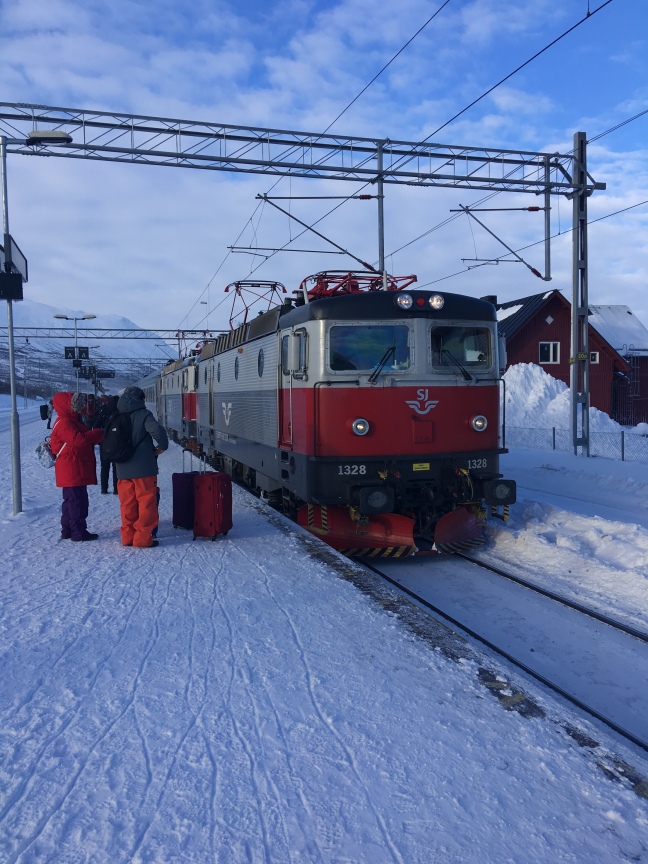 Kiruna provides a free shuttle bus service from the temporary train station to the central bus station and we both rolled our eyes at the tourists unable and unwilling to carry their suitcases up the flight of steps to the bus. If you can’t carry it yourself, you shouldn’t have it! With time to kill for the #501 bus onwards we found a cafe up the hill (Katherine didn’t slip) to top up our hot chocolate quota for the day, pairing it with a fresh cream bun, with some marzipan goo inside for good measure. Expect to see this on a GBBO in the future. 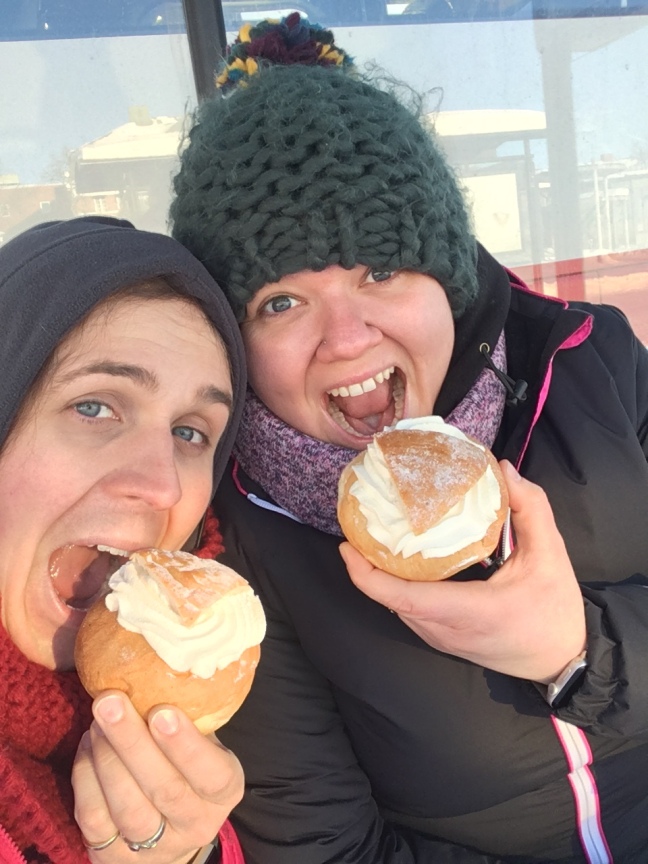 We checked in to the IceHotel and were provided with boiler suits, space boots, little hats and giant mittens. Suitably dressed for a mission to the moon, we made it over in time for a tour of the hotel. We were given dozens of interesting facts and the sheer marvel of the construction was more prominent after the talk. We were then guided to the Ice365, a hotel section now open 365 days of the year, with snice (snow and ice mixture) compacted around a permanent structure and kept at -5* all year round by a massive array of solar panels. 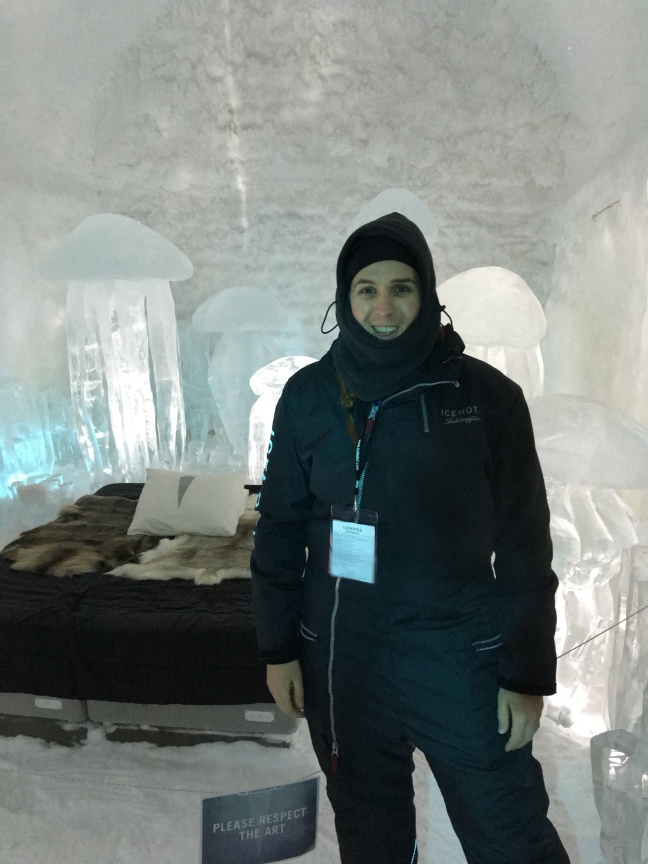 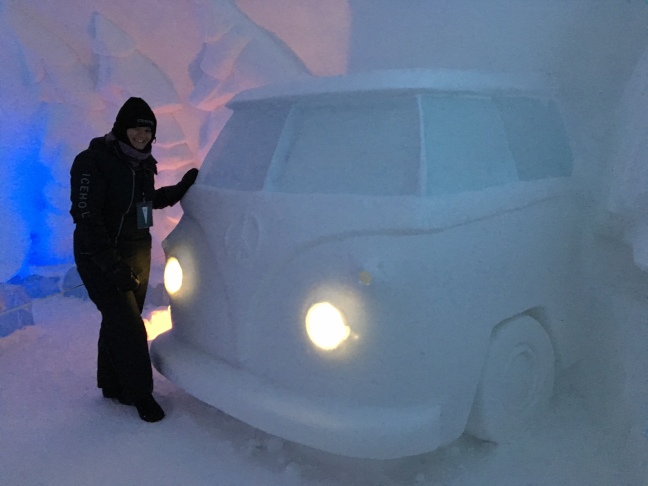 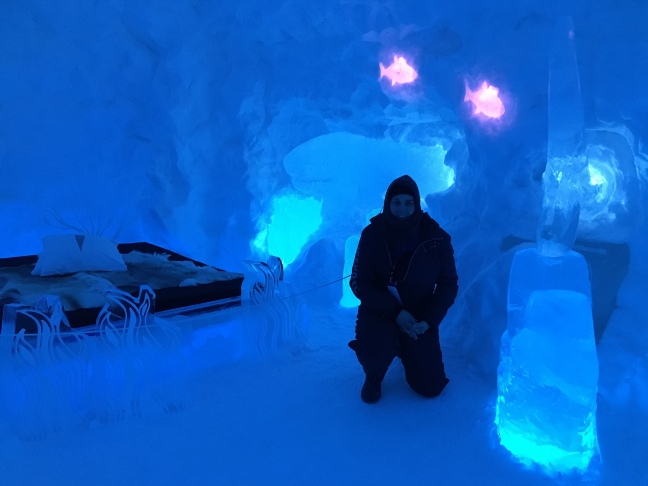 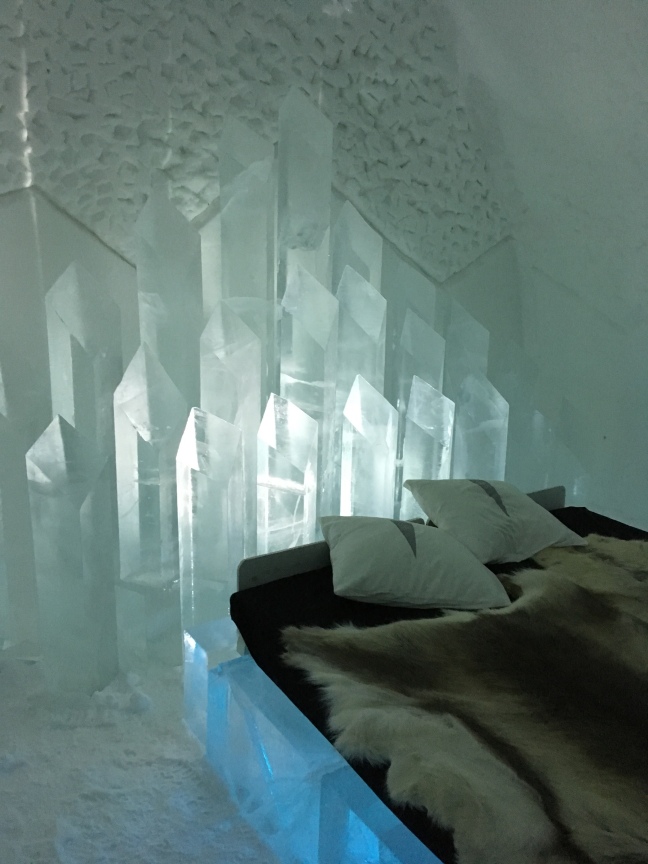 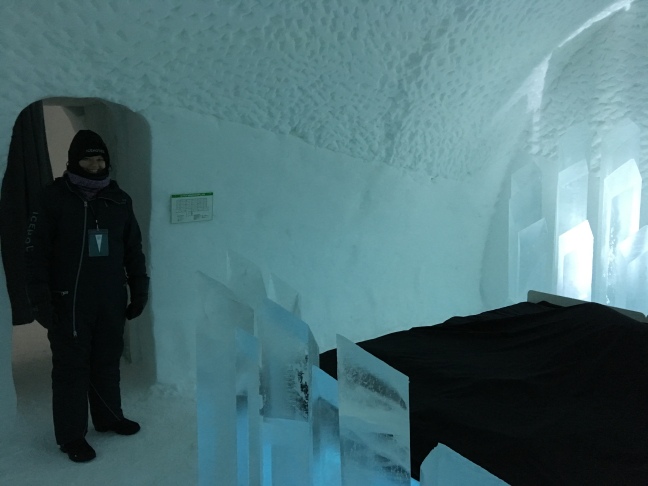 We then went exploring the rooms by ourselves, with the designs just breathtaking. Some of the artists have never worked with ice before and have just proposed the ideas to the rooms, while some are clearly a dab hand at working with this raw material and showcase their talents in inconceivable fashions. Like, how on earth did someone think to create a staircase out of ice, and get it completed in the two week allotted time. Bonkers! 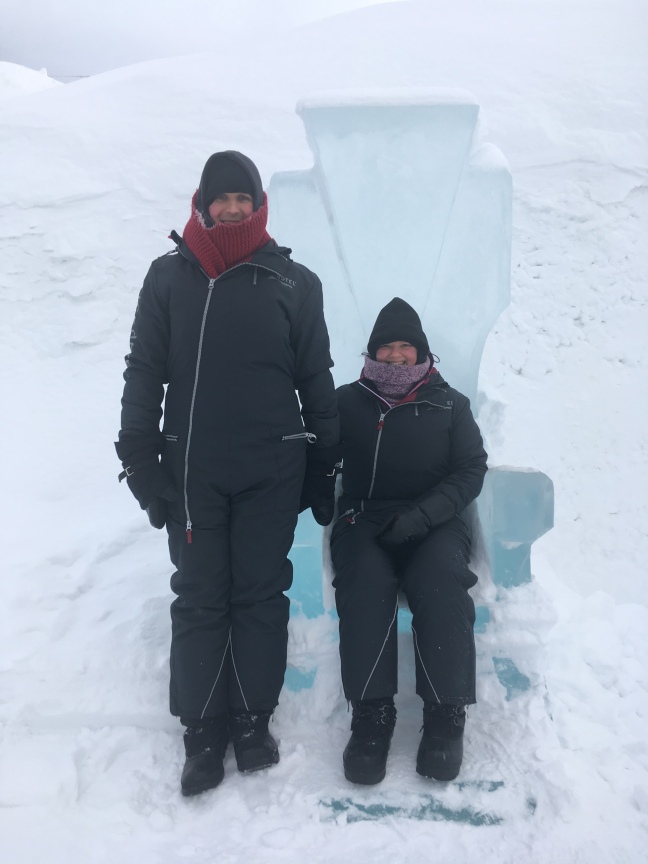 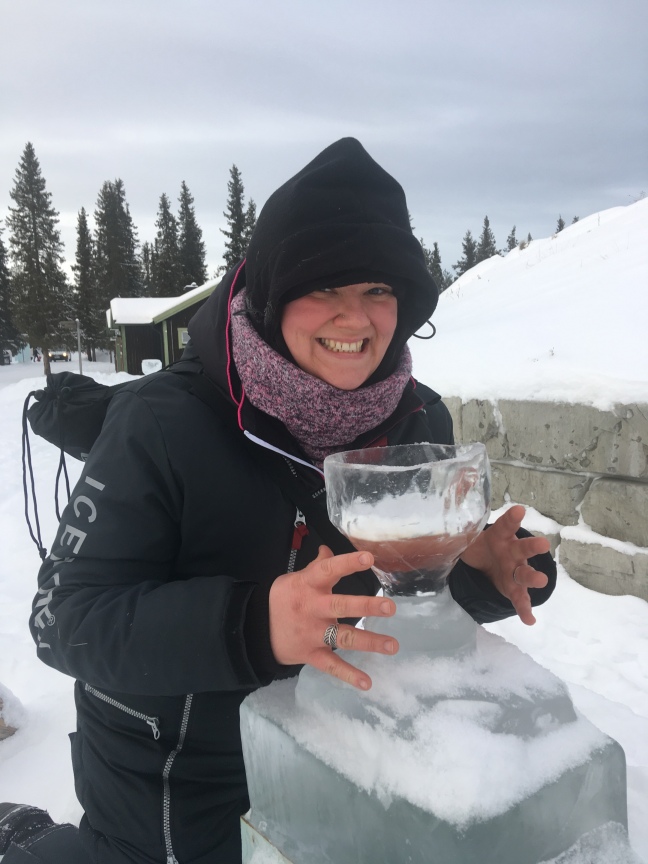 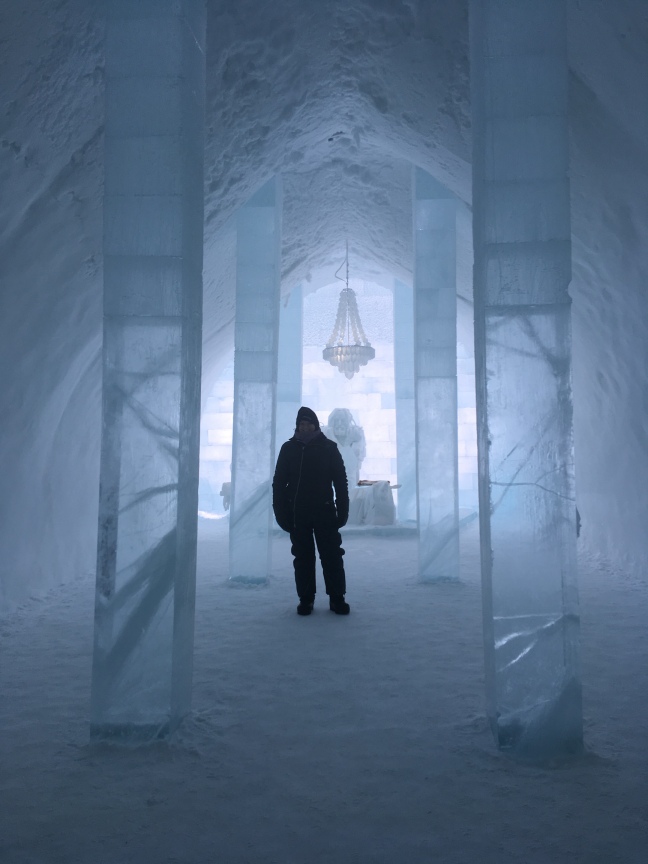 Cutting it tight on time again, we got back for the briefing on how to sleep in the cold rooms and frankly it was dragged out a bit. I think it was self explanatory that you wear your pyjamas, run to bed and get in to your sleeping bag. In the morning run back to the hotel. And pray that you don’t need the loo in the night.

With dinner we opted for the 3 course à la carte rather than the Ice Dinner Experience. So, with porcelain plates instead of ice, we had a meal that will make it in to our top 10, maybe top 5 ever. Sven, Katherine’s main dish of reindeer, was the star of the evening with food envy being evident across the table with my Artic Char.

We layered up a bit more to go out looking for the northern lights and we couldn’t get to a darker area quick enough to start photographing the display in all their brilliance. Setting up the main camera wrong (again), the iPhone with it’s £1.99 app seemed to be capturing images with the settings I wanted. It was spectacular. To see the Aurora borealis once was special, this was a treat. 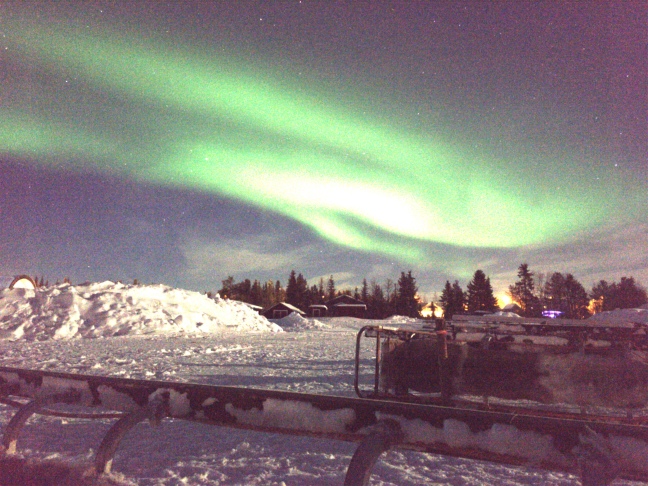 We both lost feeling to our extremities, the temperature now at -26* (we shared a taxi to the airport with someone that said it finally dropped to -33*) and retreated to the fire in the main lobby to regain conscience and dexterity. We did one more jaunt outside and had a brief glimpse of the lights once more. Another respite in the lobby, this time bagging a spot by the fire, we were finally thawing out, camera lens defrosted and ready to call it a night when the receptionist shouted at everyone present to go outside as there was a massive display. Chasing her outside, the whole complex was abuzz with activity with people running to the river to get to a darker spot for photos. We were just crouching to the ground or huddling by the warm window panes and trying to get any shots of this incredible display. The dancing and flickering across the sky was incomprehensible and then the green hues, vibrant in their contrast to the black starry night, turned to pink and yellow and meandered across the sky with a rhythmic wave action until it faded back to green and disappeared. The show, for there is no other word for it, let us humbled and in awe of the natural phenomenon. We went to bed buzzing, which probably isn’t the best thing when you’re trying to sleep at -5*C. 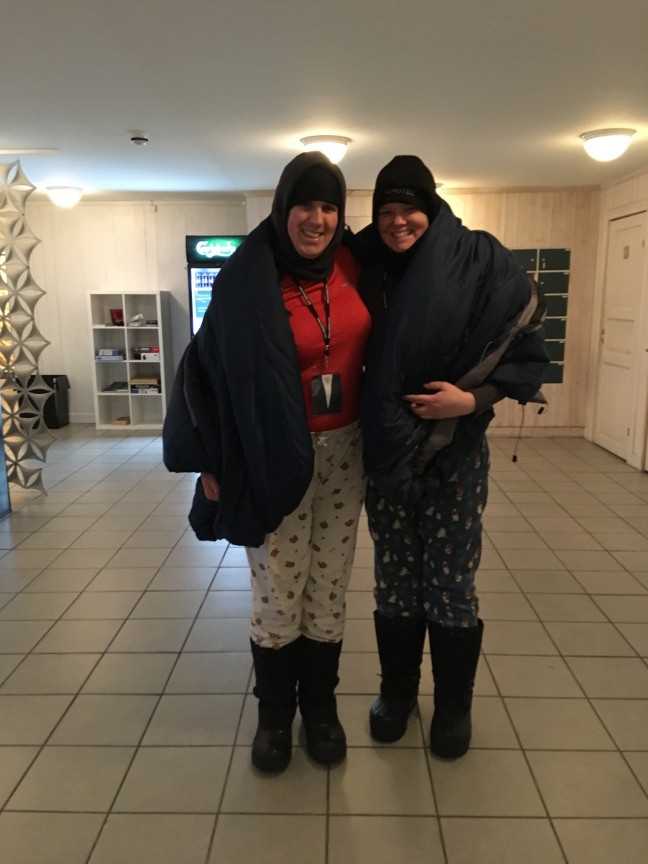 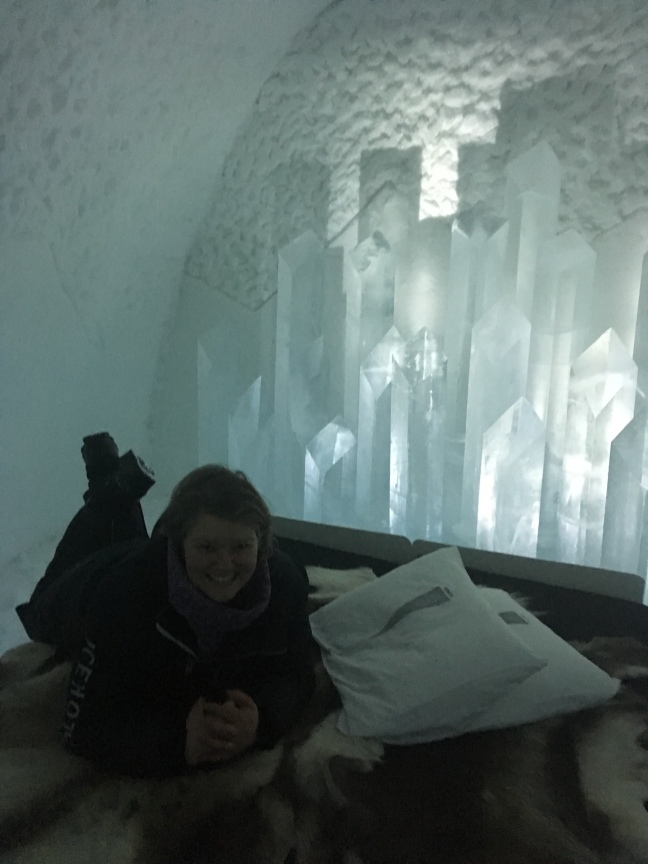