Today was a piece of massive guess work, finger crossing and generally hoping for the best!!! Kat had seen a photo on Pinterest of a stunning cave temple in Myanmar. Far too much time searching and searching for more information about it gave us three pieces of information – the cave name, it’s (very) approximate location and a blog from another traveller who had visited from a private taxi tour on a day trip from Mandalay. Spurred on by the fact it was on the way to Kalaw (our next town destination), we asked the hotel manager if it was possible to get a bus to Kyaukse and then a bus to Kalaw as there is no information online or in the Lonely Planet guidebook. A few phone calls later, he reassured me that it was possible, so we threw caution to the wind and headed off with our destinations written in English and Burmese in our notebook. Walked 2 blocks down the road to the corner of 82 and 37 street, where a very lovely man flagged down the correct shared pick-up truck to take us to Kyaukse for 500 khat each (about 30p). The locals thought it was hilarious to see two foreigners on the bus. 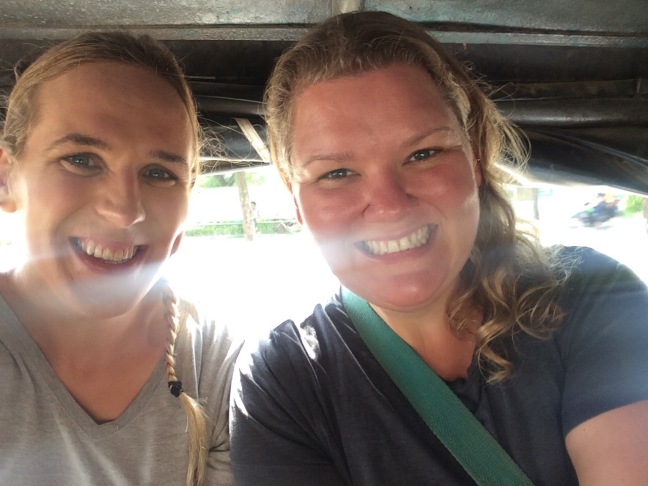 One elderly gentleman tried to converse with Jayne using some broken English and writing down key words. The old woman opposite kept rolling her eyes at me every time the old man spoke to Jayne… And then insinuated that he spoke too much using hand gestures when he got off (after trying to convince Jayne to go to his house, calling her beautiful and me fat!). The shared pick-up truck conductor had been shown a screen shot of the temple we wanted to visit and dropped us off outside the motorbike taxi rank in Kyaukse. Wanting to make sure we could get a bus to Kalaw and we weren’t going to miss it, we asked the motorbike taxi men to take us to the bus station first. A rather amusing conversation via writing and translating via the motorbike taxi man who knew very little English. Established that we could get a bus to Kalaw that would leave here at 8pm and arrive at midnight. Happy that it was sorted, we left our big backpack with the ticket ladies and jumped back on the bikes to visit this little known temple in the hills. 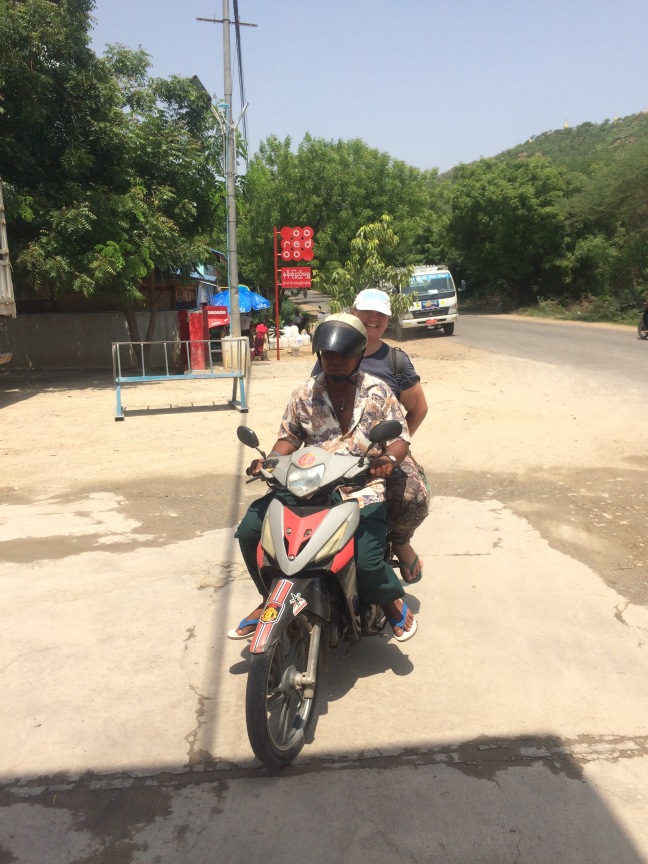 Thinking we had been overcharged for our motorbike taxis at 10,000 khat each return (about £6), it was a surprise when we rode over 20km out of the main town!

The journey itself was long. Between stopping for air in the tyres at one place, diesel at a garage and taking phone calls, it must have been an hour to get out there. The trip back later was thankfully a non-stop, but ass-numbing 45 minute trip. We passed through villages collecting money for festivals, with them shaking what must be nuts and bolts (no coin currency that we have seen) in beautifully shaped silver bowls. We passed the remains of a brick stupa and then started seeing dozens of gilded stupas in the hills and plains. And on we went! The APR Energy Plant has the air vents pointed out across the road and we didn’t slow down for the 100m stretch past the furnace. Passing a cement mixing factory and quarry I personally was worrying that the temple cave may only be a short-lived spectacle, with damage coming from the establishment on the other side of the hill. But, we drove down a road passing another factory and I worried not only if the cave still existed, but if we were going to the right place at all. Turning in to a monastery in the middle of a village we became quietly optimistic that we had arrived. With no other vehicles, tourists or signs around we were pointed up towards the hill and the beginning of some steps.  Edit 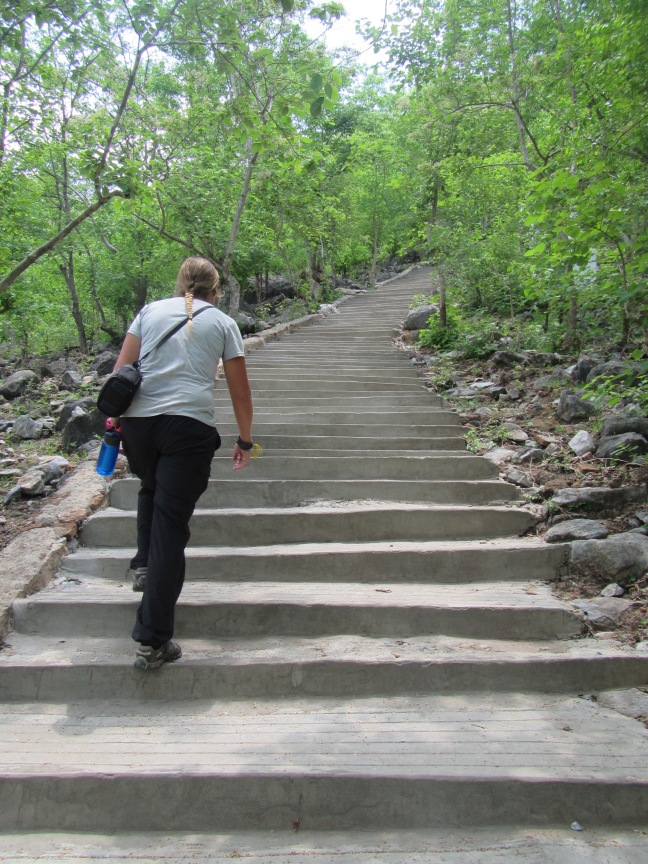 Little did we know that the pointed finger up the steps was like ‘the Ghost of Future yet to Come’ directing Ebenezer Scrooge to his tombstone. We were being directed to a never-ending set of stairs, in the mid-day heat, with the count-down of numbers in the cement of the steps baring no relation to the end of the hike, nor to the next shelter. Katherine likened it to being tortured on a stairmaster inside a sauna for an hour. 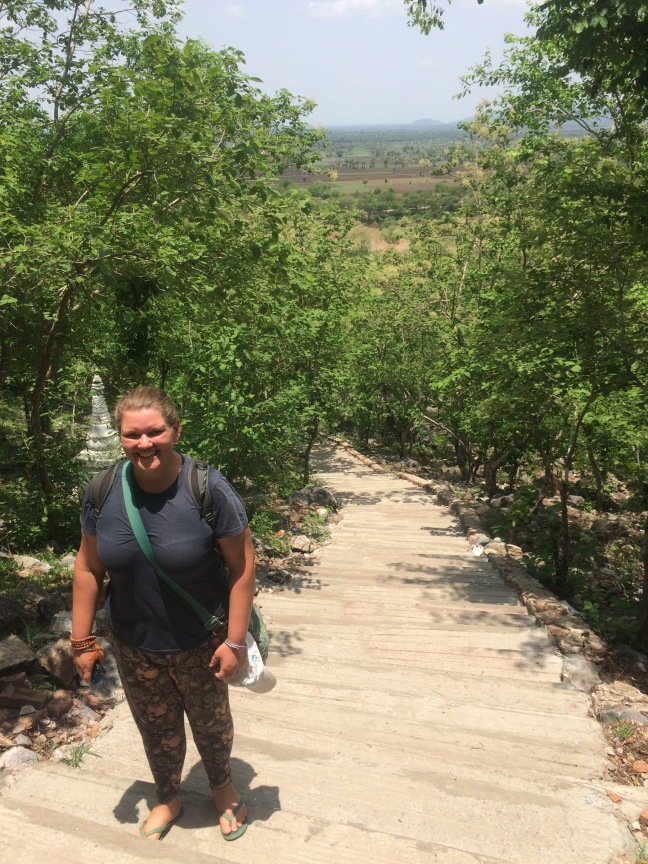 Every time we thought we were reaching a plateau we were fooled in to another stretch up and in to the hills. Until suddenly, taking shape through the branches we could make out houses! Katherine had been feeling faint at several of the little shelters en route, but it was now all seeming like it was to be worth it.

Taking off shoes and flip-flops – not thinking clearly and/or ahead to leave them in the shade – we dashed up the staircase that could have fried an egg and gazed down in to cave. The first thing we saw was the massive reclining Buddha. 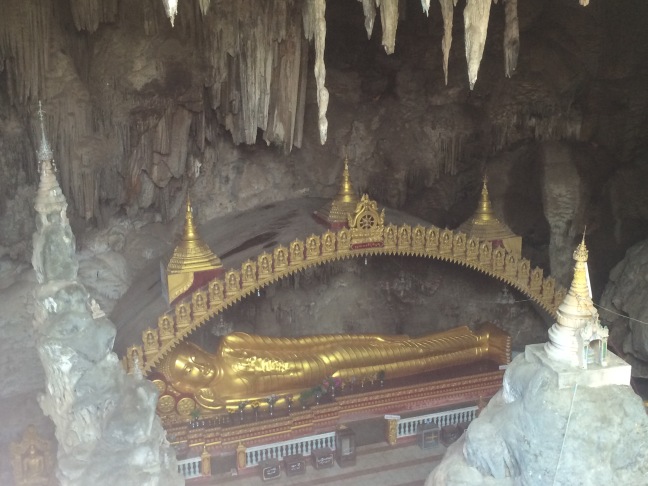 At about 12m long it took up most of the back wall of the cave. We didn’t really notice that there were hundreds of other statues around the place. We were caught up in the moment by so much at once; the stalactites with some squirrels running around the mouth of the cave, the stalacmites with hti (the top of a stupa I think) and the smell of and chirping of bats. 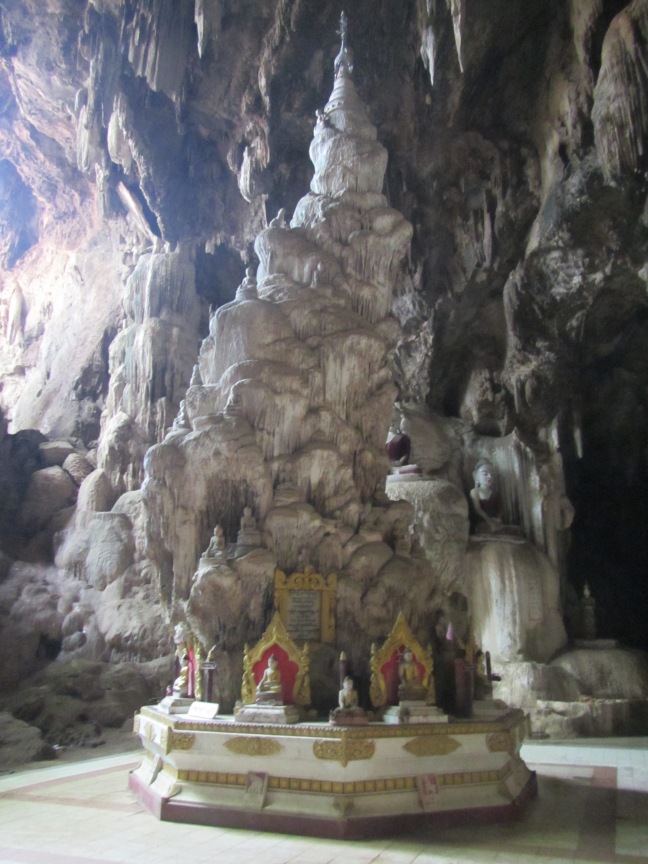 Descending a short flight of steps in to the cave itself, the place is deceptively much longer than it appears. The floor is covered in bat droppings with puddles of pee in a few places and the far corners are pitch black. Three lads arrived later on and they tried to investigate a corner with lights on their phone… bad idea, don’t disturb the bats!!! 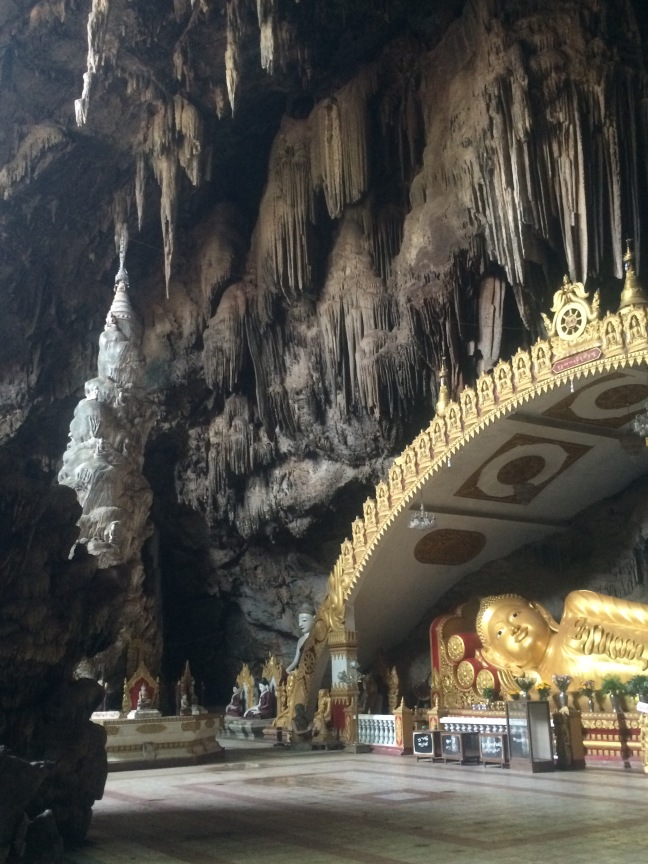 The statues of Buddha in his various postures adorned every available nook, cranny and level shelf space. Carved in marble and stone, some painted, none with the led lights that are popular in other places, the cave temple was richly decorated in a modest fashion. 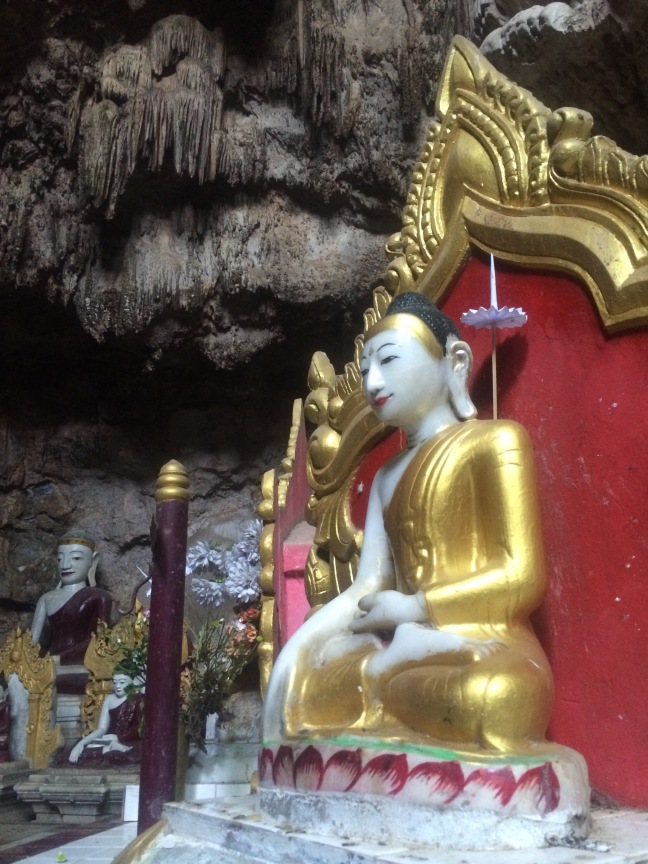 Every which way you looked and from different angles, you saw a new statue, or a new rock formation. The lighting changed depending on where you stood and that without us staying for an extended period of time or sunrise/sunset. It was/is a truly unforgettable place to visit and well worth the gamble of trying to get to. 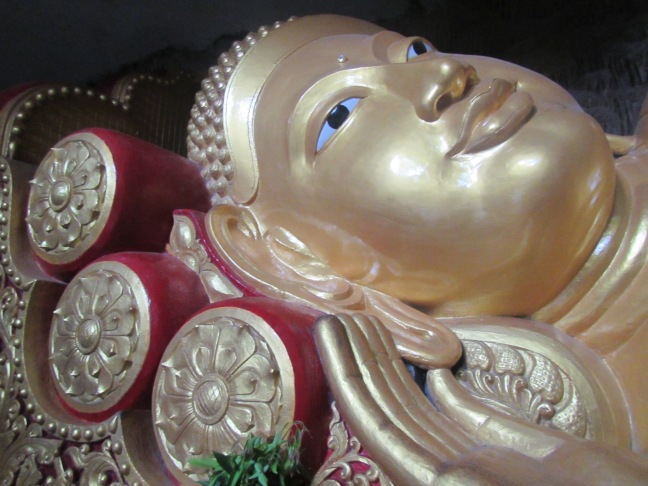 The journey back, as previously described, was a bit painful. With a fizzy drink in us all – including the taxi drivers – we went next door to get some lunch. The funniest 10 minutes ensued, using at the Point It book, our notebook and generally pointing at food items trough the window of the kitchen. 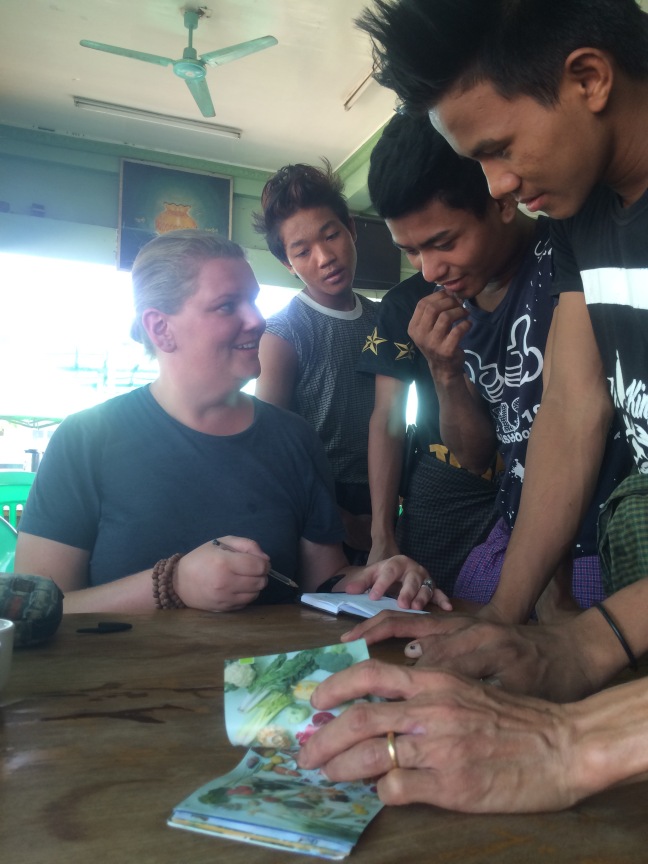 With a bit of Myanmar we worked out a price and thought ahead, by getting the most clued up waiter to write down our order (fried rice and an egg) in their own language for later that evening. 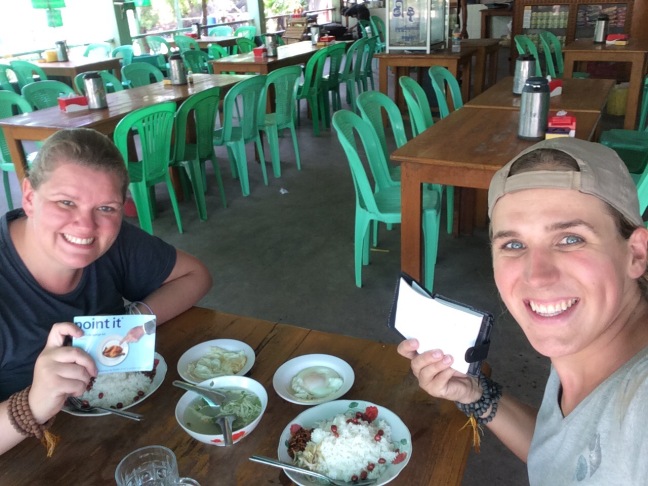 Walked around KyaukSe for a bit, bought crackers and hard sweets for the bus journey in case dinner wasn’t as successful as lunch. We also bought the most horrible tasting cafe latte from Nescafé in a tin can we couldn’t crush afterwards and an ice cream. Spent some hours transferring files around on the netbook and iPad so we could watch some Friends. We went back next door for dinner where we had a gentleman converse and watch us eat dinner. He also thought us how to pronounce the items we were ordering. Turned out he was a policeman, only stopping to pick up a packet of bedel nut and tobacco, but stayed as he rarely gets to meet or talk to foreigners. He drove off with the cherry on the roof of his car as if he were off to fight crime.

The bus finally turned up and with progress looking to be much slower than that expected, we huddled up and got some kip. They woke us up and escorted us off the bus in Kalaw at 02:30 in the morning. With the waiting taxi drivers seeing we had only one bag and a map, they were happy to direct us to our hotel rather than pester us. We walked past a stupa adorned in glass mosaic and the floodlights made it look like it was a diamond (or a rather funky techno disco temple). 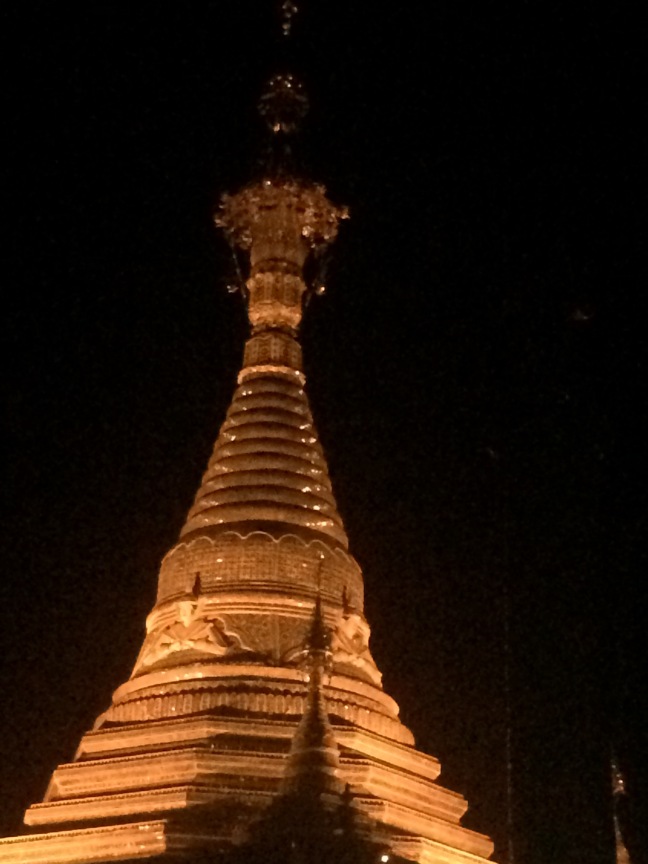 The stars were peeping through the clouds and we arrived at Golden Kalaw Inn. The gentleman in reception, being ever so polite for someone woken up in the middle of the night, showed us to our room where we passed out from a mega day.