Having heard that Port Macquarie is one of the best places to see whales, as it is the second most eastern point in New South Wales and after seeing humpback whales so close to the shore yesterday, we decided that a whale watching boat cruise was a must do! Having organised it through our hostel last night, we were up at 6am and walking down the streets to the harbour looking for an ATM so we could pay!! Finally found an NAB bank which gave us some cash and saw a koala sculpture inside the branch. Having seen a couple of koala sculptures at the koala hospital, we thought it was simply part of their display. However, it turns out that they are part of a Hello Koalas Sculpture Trail, just like the Shepparton Moooving cow art. The fifty-one large scale koala sculptures are manufactured in fibreglass, individually designed and hand painted by local artists – had we known about them sooner, we would have definitely tried to find more of them!

Down at the port, we donned some very fetching life jackets and climbed aboard our RIB (rigid inflatable boat) before heading out past the magnificent coastline and into the open expanse of the Pacific Ocean. 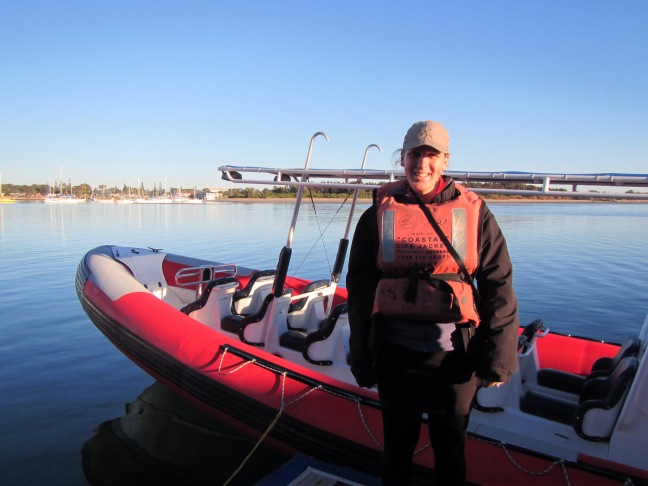 A bit more of ‘whale chasing’ as opposed to ‘whale watching’, our captain seemed a little impatient to just sit and wait for the whales to surface (I guess you have to give the guests what they paid for!) We must have been out on the water for about 2 hours looking for whales – I’d spotted one breaching in the distance, so the skipper headed out north to try and follow it for a while. However, it didn’t come up again (or it changed direction!) so we headed back down south. We learnt that between June and October the whales begin their northern migration to to give birth in the Whitsundays, returning to the Antarctic with their young by December, to feed.

After a few curse words from the captain about the lack of activity from the whales, we spotted a mother and its calf within 10 to 20 metres from our RIB. It was beautiful and so special to see the fifth largest mammal on earth up close, with the fully grown adult weighing up to 40 tonnes each. One of the whales breached in front of the boat, which was amazing – unfortunately, the only photo we managed to capture was of the massive splash as it came back down!!! 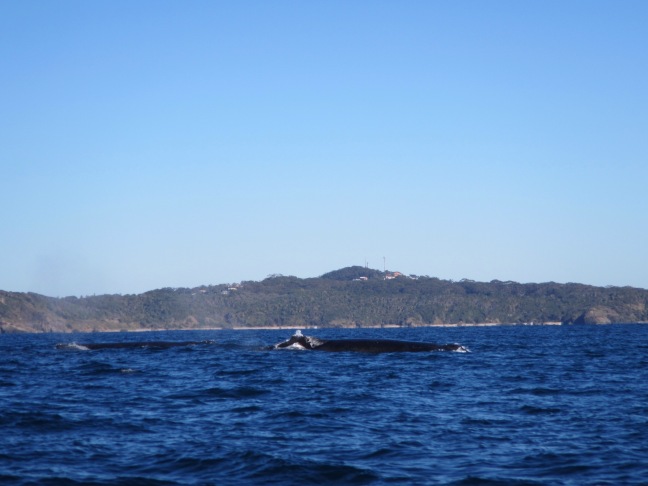 Headed back into shore and spotted dolphins swimming nearby the surfers at the beach (lucky bastards!!!! Although, the water must be freezing so I guess it is an appropriate reward for their dedication – I wouldn’t have been in that water, even in a wetsuit). Walked back up the hill to the hostel, checked out and hung around the hostel (using their wifi) until it was time to get the coach to Coffs Harbour. 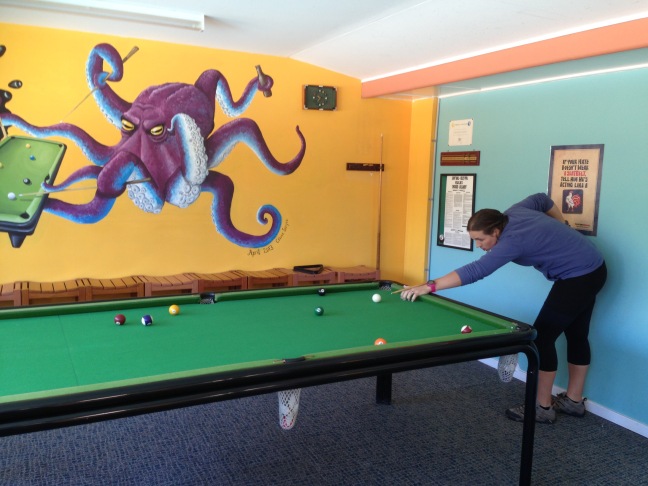 Managed to find myself a pair of ‘sports’ leggings in the free clothing recycle bin, which is great as I really needed a new pair of trousers that actually fit. Used the time at the hostel to catch up on blogs and clear SD cards of photos ready for the rest of our trip around Australia. The resident parrot came to check up on us, deciding that Jayne’s head was a perfect perch!

Had some lunch before jumping in the van and getting dropped off at the coach station. Brian was our coach driver again and was in an equally cheerful mood as he was the other day when he drove us from Sydney. Only four of us on the bus today, so we chatted away about what we had done in Port Macquarie before setting off. (Un)fortunately, the wifi wasn’t working on the coach toady so we had to entertain ourselves the good old fashioned way – reading books, listening to music and staring out the windows.

Took about 3 hours to get up to Coffs Harbour, where we were met by Craig who drove us to the YHA hostel (we are definitely being spoilt! I have to say, youth hostels are not as painful as I thought they would be!). Craig chatted away on the journey about what we could do and even took us to the view point so we could orientate ourselves with the town.
Dropped us off at the hostel and we checked in. We have been placed in the staff dorm with the two cleaners, who are clearly used to being on their own… The place was a bomb site. Clearly embarrassed, the room was a (bit) tidier when we returned later on to go to bed!! Headed to the nearby supermarket to get groceries only to find it had closed 10 minutes earlier… The next nearest supermarket was 3km away so we started walking!!
Back at the hostel, Jayne made dinner as I worked out ways to get us to Dorrigo National Park tomorrow (there is only one… Renting a car!). Booked a car with Thrifty for tomorrow and headed to bed, surprisingly tired after our early start this morning but our relatively ‘easy’ day.