I missed the fight scene in the mountains and the end sequence of Spectre, drifting in and out of a restless sleep. The chairs were comfortable, but the people in front and behind must have been dreaming of being in a roller-coaster, bouncing up and down constantly. There then followed an announcement over the intercom looking for a doctor to help a sick passenger. Now, I’m not a doctor, (although a job with a nurses’ outfit might be nice), but I went and spoke to a cabin crew member to offer help. I remember how it must have been 15 years ago I was on a flight with my dad, coming back from London, having just completed an Oxygen Provider course and they needed to set up the O2 cylinder during the flight. It would have been really cool to be able to set up the oxygen and help, with the patient suffering from Deep Vein Thrombosis in the leg, but alas, I think they wanted someone more legit. Finally arriving in Cologne, the sick passenger was taken off and then a stream of disgruntled passengers disembarked… only to be part of more and more queuing and waiting at passport control, baggage reclaim and then the German Wings ticket desk.

Although exhausted, I must have been one of a few that wasn’t complaining (or reminiscing about a ‘Gap Year’). The wifi in the airport was brilliant and the 2 hour queue went by relatively painless. The staff at the desk, having come in on a day off, were fantastic. They were putting people on a 07:05 flight to Stansted if there was space, a 15:45 flight with a free hotel and taxi voucher, or a flight to Heathrow at 08:30 with a €12 food voucher. It was a no-brainer! Get in to Heathrow, a much more convenient airport for me, with the whole day ahead of me, and a voucher for some breakfast. SCORE!!! 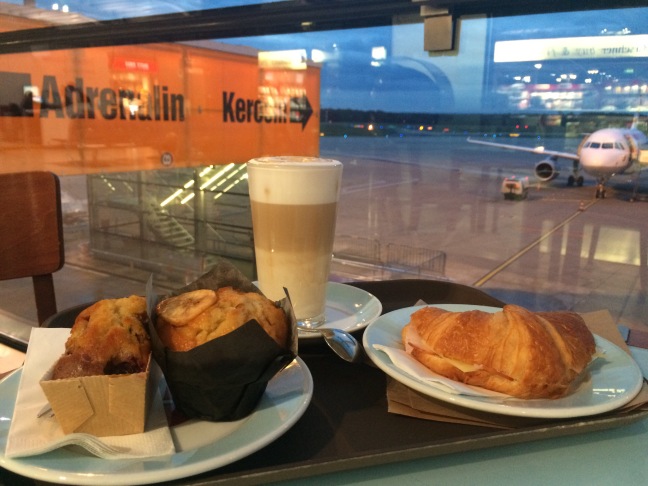 Katherine had arrived safely down under. The Whatsapp and FB messages come quicker than my brain could function and we even managed a Skype call. Tracey had put together a wicked sign for the arrivals lounge and a Aussie Starter Pack. I mention it here on this blog entry as I am sure the subtlety will be noted and I shall receive an equally warm welcome and snacks in three weeks time.

Flight to London with a bit of a snooze, everything seemed so straight forward and simple – the familiarity and ease of getting through the terminals, an X26 express bus and the streets all being exactly the same. It was a surreal and unnerving feeling and was glad to arrive at Ed and Narae’s. But, at this stage my brain was mush. I didn’t read the texts from Narae properly and headed out to buy food and top up the Oyster card. There was several ‘Brain Fart’ moments when I locked the pin on the debit card, having not used it in 8 months, and the choice of food in the co-op was so overwhelming I just went for soup and bread. It was only after eventually figuring out how to work the hob that I had noticed my choice of lentil soup and pitta bread was altogether reminiscent of Dal Bhat and Chapatti. I shall rectify this with a Cornish Pasty and proper coffee tomorrow and start cracking on with my list of jobs.